The 1990’s were the “Golden Age” of the Orange County California music scene. Bands like The Offspring, No Doubt, Sugar Ray and Social Distortion where 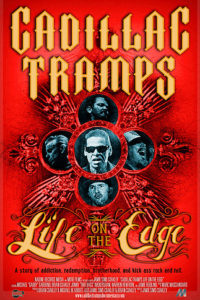 blowing up the mainstream and selling millions of records around the world.  Meanwhile, the undisputed kings of the O.C. scene, The Cadillac Tramps, were falling apart.  Infighting, addiction, frustration and dysfunction would tear the band apart at the peak of their success, but their bond would prove too strong to remain broken for long. THE CADILLAC TRAMPS: LIFE ON THE EDGE  is a humble, honest and entertaining look at five young men who found each other in sobriety, created a lasting musical legacy that influenced indie rock’s biggest bands, and overcame the past to support lead singer Michael “Gabby” Gaborno as he fights for his life from the ravages of Hep-C. First time filmmaker, Jamie Sims Coakley, expertly mixes a colorful combination of archival footage, insightful artist interviews and intimate vérité footage together into an arresting, heartwarming and cautionary tale of brotherhood, reflection and the power of music to heal and unite us. Director Jamie Sims Coakley joins us  to talk about the music, the what ifs, and the bond that has been their musical journey.

For news and updates go to: cadillactrampsdocumentary.com

Official Premiere with Q&A with Director Jamie Sims Coakley and members of The Cadillac Tramps.

Enjoy the story of The Cadillac Tramps on the big screen!