Who is the man behind the most highly controversial, intensely debated topics in modern medicine? In THE PATHOLOGICAL OPTIMIST, director Miranda Bailey brings us a 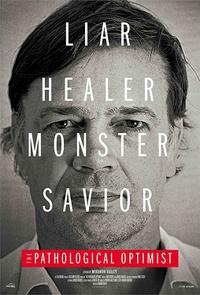 character study of Dr. Andrew Wakefield, one of 13 co-authors of a notorious 1998 paper in the UK medical Journal The Lancet, but who became the very public face of what has come to be known as “The Anti-Vax Movement.” An expat from Britain who currently resides in Austin, Texas, Wakefield allowed Bailey and her team to follow him and his family for five years beginning in 2011 as he fought a defamation battle in the courts against the British Medical Journal and journalist Brian Deer. The results of that case – and the self-reflection, pronouncements, and observations of Wakefield, his legal team, wife, and his children – create a complex and incisive look at one of our era’s most fear-provoking and continuously provocative figures. THE PATHOLOGICAL OPTIMIST takes no sides, instead letting Wakefield and the battles he 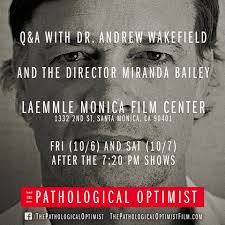 fought speak for themselves. Director Miranda Bailey joins us to talk about her riveting portrait of a man driven to prove his detractors wrong.

Director’s statement: “I gravitate towards provocative and discussion-making material for most of my films. When I began this journey in 2010, Andrew Wakefield was much less known in the United States than he is now. But those who did know him seemed to have very strong feelings either for or against him. I was curious as to who he was and how he could stand up to such rejection from his peers and such scrutiny in the media regarding his part in the MMR Scandal. As the style of my film evolved, I decided it was not my place to defend Andrew Wakefield, nor was it to condemn him. My interest lies in observance. I asked questions and observed. It is up to the audience to decide what they see. ”

For news and updates got to: The Pathological Optimistfilm.com

“Regardless of where you stand on the vaccination issue, it’s possible to relish Miranda Bailey’s highly informative, anger-arousing film, and to feel it’s promoting your own views.” – Lisa Jo Sagolia. Film Journal International

“The controversy over vaccinations will rage on and this cinematic portrait will merely be a footnote. But it proves a compelling one, however you may feel about the burning issue.” – Frank Scheck, Hollywood Reporter