OLEANDER, (Emily Robinson)17, is the star and sole creator of her 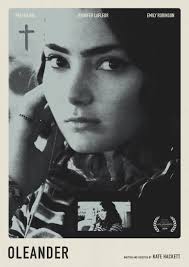 own provocative, sex-positive YouTube channel. She is also an unwilling student at a Christian abstinence program, led by the poised and charismatic Alissa, (Peri Gilpin) 50s. When Alissa demands that Oleander issue an on-camera apology for mocking her abstinence program online, a fierce battle of wills ensues. Alissa is aided by Kim, (Jennifer Lafleur) 30s, a filmmaker-for-hire who has no

allegiance other than to serve her client. Oleander fights desperately for her voice and her beliefs, but will her anti slut-shaming message be able to stand up against the manipulative power of the two adults who seek to suppress her? Director Kate Hackett joins us for a conversation on her thoughtful, sharply focused look at the power of manipulation, respect, trust and sexual agency.

For news, updates and screenings go to: oleandershortfilm.com

About the filmmaker – Kate Hackett is a filmmaker and film editor based in Los Angeles. She is a 2020 Emmy winner for her editing work on the Netflix documentary series “Cheer.” Her work as an editor also includes the Emmy award winning Netflix documentary series “Last Chance U,” and the Sundance documentary feature Half The Picture. She was the 2018 Sundance Institute Sally Menke Editing Fellow. As a screenwriter, she was a 2016 American Zoetrope Screenwriting contest finalist with the screenplay Purify My Heart.