ONE HOUR OUTCALL is a sophisticated, sexy drama unraveling 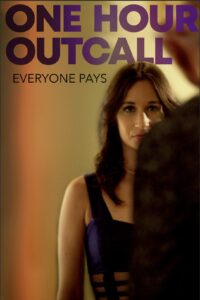 the complex relationship between a call girl and her client who meet every Thursday night. Esmeralda (Natalia Ochoa) is a college-aged, high-class escort, Greg (William Norrett ) a middle-aged, divorced introvert. Sexual tension and curiosity fill the air during their first rendezvous, each vying for the upper hand. As they continue their weekly explorations, however, they start to develop an intimacy that goes beyond the transactional and into the deeply personal. When his ulterior motive is revealed, their interludes force Greg to confront his relationship with Esmeralda, his family, and his own inner demons. And it

forces Esmeralda to question whether or not she can truly leave her emotions at the door. ONE HOUR OUTCALL stars Natalia Ochoa (The Pastor, The Real Steal), William Norrett (Carbuncle, Elysian Gardens), Kristin Carey (Hall Pass, Criminal Minds),

Shannon Leigh Godwin (Fake The Joy, Fantasy Fitness), Octavio Rodriguez (NCIS: New Orleans, Homeland”), and Will Holbrook (Ride Home, The Gunman). Director T. Arthur Cottam and Writer / Lead Actor William Norrett join us to talk about their character driven drama told in a series of flashbacks and real-time fragments that add up to a gripping story of power, control and hidden agendas.

For news, screenings and updates go to: onehouroutcall.com

About the filmmaker(s) Award-winning director T. Arthur Cottam is a graduate of New York University’s Tisch School of the Arts. His critically-acclaimed first feature film, Carbuncle, was nominated for Best Feature Film at the Milan Film Festival and was hailed as “brilliant” by Campus Circle and “wonderfully eccentric” by Films In Review. His follow-up film, Pollywogs, was nominated for Best Narrative Feature at the Los Angeles Film Festival and is available on various streaming platforms, including Amazon Prime and iTunes. His short film phenomenon, Pornographic Apathetic, won 9 awards and played at film festivals and art museums around the world from 2003 until 2019. The Los Angeles Times said, “The piece makes you laugh while illustrating one of the paradoxes of smut: At its core, it’s rather idiotic and boring.” The film became the most viewed film on Atom.com which was later acquired by Comedy Central. His controversial 2006 film Filthy Food received the award for Best Experimental Short film at CineKink NYC, screened at numerous film festivals and was licensed for French television by Canal+. Filthy Food was also banned for 12 years in Italy and Korea, and was censored at the former AFI Dallas Film Festival. Cottam’s short 52 Takes of the Same Thing, Then Boobs was featured at several film festivals, including theFestival Internacional de Curtas Metragens de Sao Paulo (Brazil), Lille International Short Film Festival (France), Visionaria (Italy) and the Austin Film Festival. It was described as “the most outrageously ‘out there’ film that we have scheduled” by AFI Fest Director of Programming, Lane Kneedler. His feature film One Hour Outcall won Best Screenplay at the Block Island Film Festival and was an official selection of the Cinequest Film & Creativity Festival. Cottam is currently in post-production on two additional feature films, Objects and No Apparent Motive.

Writer / Lead Actor William Norrett is a graduate of Regis High School in New York City and Duke University, William Norrett is the author of several plays, including The Sophisticated Rogue, The Dealer Was Showing Six, and Brendan O’Lenihan Leaves Three Daughters, and the co-author of the musical comedy Presidential Suite. He wrote the novel The Vanilla Gigolo Prescription. He is also the writer/director of the short film collection You Know What This Song’s About?