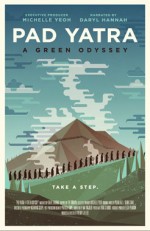 PAD YATRA: A Green Odyssey is the adventure of 700 people trekking across the Himalayas with a call to save the planet’s “3rd Pole,” a glacial region now devastated by the climate chaos associated with global warming. Battling the most treacherous terrain on the planet, the trekkers spread their message of ecological compassion through human’s most basic means – by walking on foot, village to village, and showing by example. Surviving harrowing injuries, illness, and starvation, they emerge with nearly half a ton of plastic litter strapped to their backs, triggering an historic green revolution across the rooftop of the world.  Wendy J. N. Lee drops by to talk about the harrowing journey, figuratively and literally, she took in making this remarkable documentary.