Director Carlota Pereda (Cerdita, There Will Be Monsters) debut feature film is 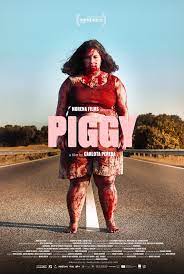 a cinematic grenade of a tale about bulling, body shaming, sexual politics. PIGGY focuses on the life of Sara as she hides away in her parent’s butcher shop hoping to avoid the constant barrage of mockery, judgment, and abuse from the other girls in her village. A teenager whose excess weight makes her the target of incessant bullying, she flees a clique of capricious girls who torment her at the town pool, only to stumble upon them being brutally kidnapped by a stranger, who drives off with them in his van. Sara sees it all: the blood, the mud, the

knife, and the van in which he has taken them. And the unknown man has seen her. A wordless pact that neither will betray. The pressure is suffocating and her guilt torments her. What if she is found out? What’s happened to the

girls? What if the unknown man returns? Director / screenwriter Carlota Pereda’s searing morality tale, PIGGY, poses many knotty questions around the social scourge of bullying. And in the process offers few easy options. Anchored by a confident, uncompromising performance by Laura Galán, Piggy is a psychological horror film like few others.

For updates and screenings go to: magnetreleasing.com/piggy

About the filmmaker – Born in 1975 in Madrid, Carlota Pereda is a film and drama series director. After graduating from the ECAM (Escuela de Cinematografía y del Audiovisual de la Comunidad de Madrid), she started her career as writer, director and script supervisor in TV series such as Periodistas, Acacias 38, El secreto de Puente Viejo, Lex, Los hombres de Paco, and Águila roja (Red Eagle), for which she was nominated for the Iris Award of the Television Academy. Her first short film, Las Rubias (The Blondes), has been selected in more than 140 national and international festivals and awarded in prestigious festivals. Cerdita (Piggy), her second short film as a director, has been selected for more than 300 international festivals, winning over 90 awards, including the Forqué and the Goya Awards. “There will be monsters” is her latest short film, produced by Movistar+. In the last Slamdance festival, Carlota Pereda received the AGBO fellowship, based on mentoring by the Russo brothers, writers, and directors of Avengers: Endgame. PIGGY is her first feature film. First released in Sundance 2022, the project was selected in the Focus CoPro in Cannes, winning the Pop Up Residency. It also won the Ventana Sur Award at the Ventana CineMad, ARRI Award at the European Work in Progress in Cologne, and has participated in Oltrecorto at the Torino Film Festival and the Berlinale Co-Production Market.

“There’s nothing patronizing or moralizing about Piggy, and it’s all the better for it; simultaneously a strong character portrait and a twisted coming-of-age film, this is tough but satisfying viewing.” – Alexandra Heller-Nicholas, AWFJ Women on Film

“Galán is extraordinary as the traumatised girl in a performance which requires a considerable amount of courage.” – Jennie Kermode, Eye for Film

“This disturbing psychological drama spirals into blood-drenched horror, its wild genre extremities never disguising the feeling that its social commentary on violence and abuse comes from a very real and personal place.” – David Rooney, Hollywood Reporter

“With all the makings of a monster that occur in “Piggy,” it’s the sheer talent on display that looms largest.” – Stephen Saito, Moveable Fest

“A meditation on the banality of horrible people, Piggy is an instant horror classic.” –

“A meditation on the banality of horrible people, Piggy is an instant horror classic.” – Sheri Flanders, Chicago Reader