One of the most important documentaries of the year, Public Trust is a film that 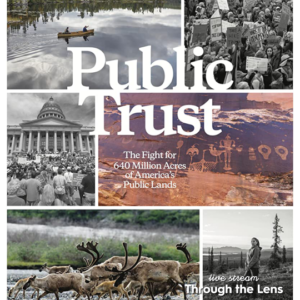 needs to be seen by everyone who enjoys getting out in nature. Although many of us take the 640 million acres of America’s Public Lands for granted, these lands are endangered by powerful forces that are attempting the largest land grab in modern history. By focusing on the eminent destruction of the Boundary Waters Wilderness in Minnesota, the downsizing of Bears Ears National Monument in Utah, and the wholesale appropriation of the Arctic National Wildlife Refuge, director David Garrett Byars enlists a slew of journalists, land historians, tribal leaders, and

government whistleblowers to present a highly persuasive argument that is impossible to ignore and vital to hear. Above all else, as Executive Producer Robert Redford tells us, “Public Trust is the story of citizens who are fighting back. It’s a much-needed wake-up call for all of us who want to preserve our unique and wild cultural heritage. Director David Garrett Byars joins us to talk about the on-going schemes by the most pernicious corporate interest to steal our heritage and how a growing group of dedicated and non-partisan people from around the country are thwarting them.

For news and updates go to: patagonia.com/films/public-trust

Our public lands are under threat. Join us in the fight to protect them. Text ‘DEFEND’ to 71333.

Public Trust will premiere on Friday September 25 on YouTube Watch it for free for the next 30 days,

About the filmmaker – David Garrett Byars made his directorial debut at the 2017 Tribeca Film Festival with No Man’s Land, a documentary about the 2016 militia occupation of the Malheur National Wildlife Refuge that sparked international headlines. Byars also produced and lensed Massacre River, Suzan Beraza’s film about statelessness in the Dominican Republic.

“If Donald Trump ever stands trial for crimes against the public interest, this film should be entered as evidence.” – Louis Proyect, Counterpunch.org

“The documentary is conventionally structured and sometimes placid, but it has an alarming message.” – Ben Kenigsberg, New York Times