In this epic story of American politics, race, and triumph against all odds, director 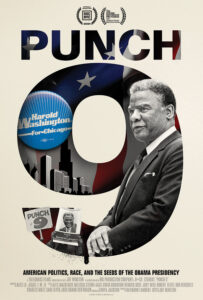 Joe Winston chronicles the captivating rise, surprising reign, and enduring legacy of Chicago’s first African American Mayor, Harold Washington. Steeped in archival footage capturing a 1980s Chicago rife with corruption and discrimination, PUNCH 9 FOR HAROLD WASHINGTON features candid interviews with Rev. Jesse Jackson, David Axelrod, Valerie Jarrett and others on the frontlines and in the backrooms of power as it follows the charismatic politician’s  shrewd maneuverings, stinging betrayals, and unlikely victories. Inspiring and compelling, Washington’s journey continues to resonate for a city and nation confronting the same

enduring social issues. Director Joe Winston, along with producers Raymond Lambert and Sonya Jackson, premiere the first feature documentary to tell Washington’s story in a moment that could not be more timely. As racism in American politics has taken

an ugly turn, while minorities and women are gaining political clout they’ve never had before, a showdown is inevitable.  While PUNCH 9 FOR HAROLD WASHINGTON is a thrilling story with unforgettable characters, it’s also a playbook for how to restore our American democracy. Director Joe Winston (What’s the Matter with Kansas, Flannery) joins us to talk about a dynamic, committed reformer, proponent of racial equity and the politician that broke the parade of corrupt, white establishment, racist, machine political hacks.

For news and updates go to: facebook.com/Punch9HaroldWashingtonMovie

Director’s Statement – I have lived my entire life in Chicago, and I grew up in the Hyde Park neighborhood, home to the University of Chicago, and, especially at that time, truly one of the city’s most integrated neighborhoods. When Harold Washington ran for mayor in 1983, I was sixteen, and Harold lived just a few blocks from my high school. The brutal, racist campaign against Washington was an eye-opener for me; I wrote about it for the school newspaper. Later, when Harold took office, parents of friends went to work for his administration. He was a local hero; as teens, his swagger, humor and vocabulary alone were enough for us to love him. Once I was with a gaggle of friends and we crashed an event where Mayor Washington was speaking, and I shot some Super-8 movie film of him – just to capture a bit of Harold’s inimitable speaking style. The white backlash to Harold’s mayoralty was dubbed “Council Wars” by a local comedian, a term that caught on immediately. For my friends and I, this cemented the notion of a fight between Good and Evil that was unfolding daily in Chicago’s City Hall. As kids, we didn’t truly understand the machinations of Chicago politics – but we all understood racism and injustice. Years later, when Barack Obama made Chicago proud again as our nation’s first African-American President, I braced myself for the inevitable backlash. After all, I’d seen it before. So I was surprised, and frankly more than a little annoyed, by all the folks I met, mostly well-meaning white liberals, who seemed to think that America’s racial divide had been healed by Obama’s election. “Are you kidding me?” I would retort, “Don’t you remember Harold Washington?” Sure enough – once Obama took office, the very same political battles of Chicago in the 1980s erupted on the national scene. For me, it was like watching a Twilight Zone episode, a Sisyphusian struggle America was doomed to repeat. The fact that Harold was in danger of being Santa-Claus-ified, or worse, largely forgotten, impelled me to make a film about him. First, I looked around to see what was out there – there were no movies that told the story I was drawn to. The project intimidated me, though. The sheer scope of information required to understand how a big city like Chicago works, what it means to be a leader who tries to change old, corrupt ways of doing business. Could I truly do Harold justice? Did enough film, video and sound exist to tell the story? Do I have the filmmaking chops to make an exciting movie about city council meetings? Once Obama left office – for a successor determined to erase his accomplishments – we all noticed a sea change in how our film proposal was received. No one missed the national and present-day implications of Harold Washington’s story. As with many projects like this one, “Punch 9” has been years in the making. Not only did we have raise the money, everyone’s least favorite part of independent documentaries, but we also had to track down enough news and documentary footage, still photos, newspapers, radio programs, even a “Honkies For Harold” button, to find what we needed to tell Washington’s story. – Joe Winston

About the filmmaker – Winston has worked as an editor, producer, and director for more than 25 years. He produced and directed “What’s the Matter with Kansas?” which Roger Ebert named as one of the Ten Best Documentaries of 2009. He edited “Flannery,” winner of the 2020 Ken Burns Prize, which debuted on American Masters in 2021. In 2013, he field produced “Citizen Koch,” which was nominated for a Grand Jury Prize at the 2013 Sundance Film Festival.