Inspired by actual crime. Set in the streets of Las Vegas, away from the strip, 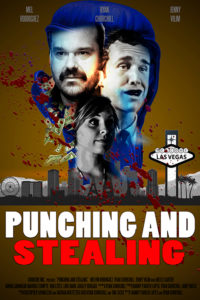 PUNCHING AND STEALING is an action comedy vigilante film about Sam Bransby (Ryan Churchill), a young man that becomes jaded and uses violence to get back his dad’s stolen pension money from corporate suits under the direction of his hitman boss (Melvin Rodriguez) in their organization, “Pension Recovery Force”. As fate would have it, as he turns to the dark side (with humor) in his vigilante faction, he meets the love of his life, Jen (Jenny Vilim). As

hard as he tries to keep it a secret from her, his vigilante world and love life collide. He attempts to convince her to be his wing-woman but her moral code prohibits her from joining Sam’s underground faction of “beating people until they’re unrecognizable.” A modern day indie caper taking place over 13 years both in plot and film. Co-director, co-producer and lead actor Ryan Churchill stops by to talk about a personal connection to the origin story for his oft-kilter, high-energy comedy and how he pulled together a terrific supporting cast that pushed PUNCHING AND STEALING into a higher trajectory.

For news and updates go to: PunchingAndStealingMovie.com

For more on the filmmaker go to: ryanchurchill.com