Octogenarian artist Audrey Flack has always been a trailblazer. QUEEN OF 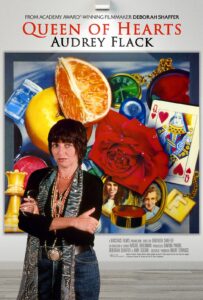 HEARTS: AUDREY FLACK, a documentary from Oscar® and Emmy® Award-winning director  Deborah Shaffer (The Wobblies, To Be Heard) and co-director/editor Rachel Reichman (Hitchcock/Truffaut, A Letter to Elia), is an intimate portrait of her life and work, as she returns to her canvas for the first time in decades, revealing her longtime struggles as an artist and mother to find her rightful place in the art world. At 88 years-old, Audrey Flack holds a unique place in the history of contemporary art in America. 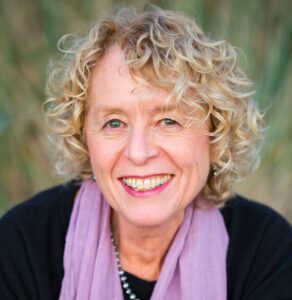 Feminist, rebel, mother, painter, sculptor and teacher, Audrey’s often controversial 40-year career evolved from abstract expressionism in the 1950s to photorealism in the 1970s. One of the first women ever included in the famed Janson’s History of Art, Audrey continues to create,

explore, and inspire with her unique style and indomitable spirit. QUEEN OF HEARTS follows Flack as she takes her work in a brand new direction and reveals her long-term struggles as the mother of a child with autism. Flack has something deep and genuine to communicate to the world. Director Deborah Shaffer joins us for a conversation on getting to know her endlessly fascinating, multi-talented subject who is still testing, still experimenting, still searching.

For news and updates go to: audreyflackfilm.com

About the filmmaker – Academy Award winning filmmaker Deborah Shaffer began making social issue documentaries as a member of the Newsreel collective the ‘70’s. She co-founded Pandora Films, one of the first women’s film companies, which produced several shorts. Her first feature documentary, The Wobblies, premiered at the New York Film Festival in 1979. During the 80’s Shaffer focused on human rights in Central America and Latin America, directing many films including  Witness to War: Dr. Charlie Clements which won the Academy Award for Short Documentary in 1985, and Fire From the Mountain and Dance of Hope which both played at the Sundance Film Festival. Shaffer directed one of the first post-September 11 films, From the Ashes: 10 Artists  followed by From the Ashes: Epilogue, which premiered at the Sundance and Tribeca Film Festivals. She is also the Executive Producer of the Academy Award-nominated short Asylum, and has directed numerous acclaimed public television programs on women and the arts. She directed and produced To Be Heard, which won awards at numerous festivals and aired nationwide on PBS. She has been awarded a Guggenheim Fellowship, and the Irene Diamond Lifetime Achievement Award by the Human Rights Watch Film Festival.

“a thoroughly engaging documentary portrait of an artist…[and] the perfect introduction to its subject, comprehensive in its detail and captivating in its approach.” – Christopher Reed, Hammer to Nail

“…what’s refreshing about Deborah Shaffer and Rachel Reichman’s look is how intimate and personal it feels, grounding a remarkable woman in a very personable and extraordinary light.”-Tynan Yanaga, Film Inquiry

“…she has been an incredible photorealist, armed with a convincing spray brush. Now, the artist finally gets her due in this documentary about her life.” – Nadja Sayej, Forbes