Inspired by one of the most beloved British family films of all time, 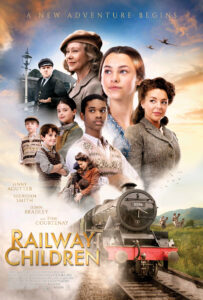 RAILWAY CHILDREN is an enchanting, moving, and heart-warming adventure for a new generation. 1944 – As life in Britain’s cities becomes increasingly perilous, three evacuee children – Lily (Beau Gadsdon), Pattie (Eden Hamilton) and Ted (Zac Cudby) Watts – are sent by their mother from Salford to the Yorkshire village of Oakworth.  There to meet them on the train station platform are Bobbie Waterbury (Jenny Agutter, reprising her iconic role in the original film), her daughter, Annie (Sheridan Smith), and grandson 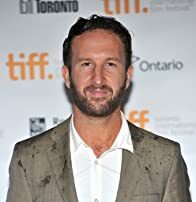 Thomas (Austin Haynes), and with their help the evacuees are soon settling into their new life in the countryside. When the children discover injured American soldier Abe (KJ Aikens), hiding out in the railyard at Oakworth Station, they are thrust

into a dangerous quest to assist their new friend who, like them, is a long way from home. Director Morgan Matthews (A Brilliant Young Mind) is our guest for a conversation on the  motivation and goals that he had in mind for an updated version a classic film, working with a raw and talented young cast that includes Beau Gadson and KJ Aikens as well as established veterans actors like Jenny Agutter, Sheridan Smith, John Bradley  and Tom Courtenay.

To watch go to: bluefoxentertainment.com/railway-children

About the filmmaker – BAFTA winning director Morgan Matthews has been making documentary films for over ten years, establishing a distinctive style. His films include the Bafta, RTS and Grierson nominated Taxidermy: Stuff the World, and Beautiful Young Minds, which was nominated for a Bafta, RTS, Prix Europa and Grierson award. Morgan founded Minnow Films in 2006 and went on to make The Fallen, a three-hour film for BBC2, remembering every British serviceman and woman who died whilst serving in the Afghanistan and Iraq wars. It was named the best documentary of 2008 at the RTS awards, and won two Baftas including Best Factual Director. His narrative films include A Brilliant Young Mind (2014) and his most recent film is an updated version of a British family film classic Railway Children (2022).

“With its light touch on serious issues, it reminds one of an extended episode of Agutter’s more recent regular employment — TV’s Call the Midwife.” – James Croot, Stuff.co.nz

“This is a heartwarming homegrown movie which proves that you do not need flashy special effects for escapism.” – Grant Rollings, The Sun (UK)

“Whether viewers will still hold “The Railway Children Return” close to their hearts in 50 years’ time remains to be seen, but no one’s childhood is getting ruined here, either on screen or off.” – Guy Lodge, Variety