The endlessly intriguing “what if” documentary, RED HEAVEN, pulls back the 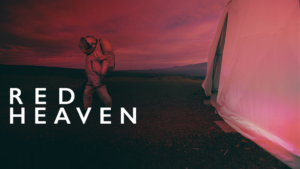 curtain on what are the practical implications for the astronauts on a mission to colonize Mars.

What are the physical, mental and psychological impacts likely to be on these explorers in an isolated and unforgiving environment as they carry out their mission to colonize Mars? RED HEAVEN focuses on a group of six volunteers, Carmel Johnston, Sheyna Gifford, Christiane Heinicke, Tristan Bassingthwaighte, Andrzej Stewart, and Cyprien Verseux as they

take part in the ultimate dress rehearsal, living inside a year-long NASA simulation designed to understand the effects of isolation on the human mind. RED HEAVEN asks audiences to look at their own fundamental needs as human beings, what they

can and can’t live without, and pose a fundamental question about why humans seem so determined to explore and expand our boundaries. Co-directors Lauren DeFilippo and Katherine Gorringe join us to talk about why they see their film in a different light since the COVID pandemic and how they gained a new understanding for what our subjects went through – living together while separated from the rest of the world, everyday a struggle against the pressures of boredom and isolation.

For news and updates go to: redheavenfilm.com

Director’s Statement – We were finishing up graduate school at Stanford University, studying documentary film, in the heart of Silicon Valley at a time when space exploration and traveling to Mars had reemerged in the public consciousness. It was also the moment when climate change was becoming a more prominent threat to the future of humanity. We wanted to interrogate this new fascination with sending humans to Mars. What does this dream of living on Mars say about our culture, about human beings? We both were contending with how to imagine the future at a time when the Earth is in crisis. We started to research possible stories that spoke to this question and we quickly learned about the Hawai’i Space Exploration Analogue and Simulation, where six people would soon be entering a small dome where they would live isolated from the rest of the world for an entire year as if they were on Mars. These six crew members of HI-SEAS were actually going to act out living on Mars, and they would be actually living in this world for an entire year – that was irresistibly intriguing. We were interested in the complex, human side of the story – the intensity of living in a place that is totally inhospitable to us as a species all the while being completely isolated from everything you’ve ever known. We felt that was the most fascinating part, yet it was being repeatedly overlooked in the race to get to Mars. In a way, RED HEAVEN was our mode of expressing an uncertainty about what the future holds. – Co-directors Lauren DeFilippo and Katherine Gorringe

Director/Producer/Editor: Katherine Gorringe is a documentary director and editor whose work has been featured at numerous festivals including SXSW, CPH:DOX and Hot Docs. Her recent editing work includes the Emmy-nominated Netflix Original Saving Capitalism, which follows former Secretary of Labor Robert Reich. RED HEAVEN is her feature documentary directorial debut.