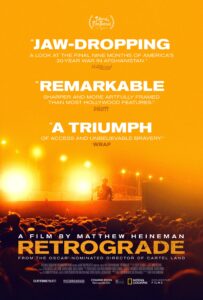 20-year war in Afghanistan from multiple perspectives: one of the last U.S. Special Forces units deployed there, a young Afghan general and his corps fighting to defend their homeland against all odds, and the civilians desperately attempting to flee as the country collapses and the Taliban take over.  From rarely seen operational control rooms

to the frontlines of battle to the chaotic Kabul airport during the final U.S. withdrawal, Oscar-nominated and Emmy Award-winning filmmaker Matthew Heineman’s latest film offers a cinematic and historic window onto the end of America’s longest war, and the costs endured for those most intimately involved.  Matthew Heineman (Cartel Land, City of

Ghosts,  The First Wave) joins us for a conversation on why he was determined to eschew the macro politics of the 20-year old war and boar in on the human cost, tribulations and vanishing compassion facing so many innocent people desperately looking for a way out of unfathomable chaos and the level of risk he and his crew the risk had to navigate.

For more go to: nationalgeographic.com/retrograde

For more on Matthew Heineman go to: Our Time Projects

About the filmmaker – Director, producer, screenwriter, cinematographer editor, Matthew Heineman is the Oscar®-Nominated and Emmy®-Winning filmmaker who has explored and illuminated many of the country’s most pressing and complex issues. THE FIRST WAVE, (2021) a feature documentary feature film with exclusive access inside one of New York City’s hardest-hit hospital systems during the harrowing first four months of the COVID-19 pandemic. THE BOY FROM MEDELLIN (2020), an astonishingly intimate portrait of international superstar J Balvin. In 2019, Heineman received a nomination for Outstanding Directorial Achievement of a First-Time Feature Film Director from the Directors Guild of America for his narrative debut, A PRIVATE WAR (2018), – making Heineman and Martin Scorsese the only filmmakers ever nominated for both narrative and documentary DGA Awards TIGER (2021), an HBO two-part docu-series  on the complicated life of Tiger Woods. THE TRADE (2020), a Showtime docu-series that chronicles a different topic each season, from the opioid crisis to human trafficking, through the eyes of those most affected. CITY OF GHOSTS (2017) follows a group of citizen journalists exposing the horrors of ISIS, CARTEL LAND (2015), explores vigilantes taking on the Mexican drug cartels, was nominated for an Academy Award for Best Documentary Feature and won three Primetime Emmy Awards, including Exceptional Merit in Documentary Filmmaking and Best Cinematography. Emmy-nominated documentary ESCAPE FIRE: THE FIGHT TO SAVE AMERICAN HEALTHCARE (2012), collaborated for two years on the Emmy-nominated HBO series  THE ALZHEIMER PROJECT (2009) and also directed and produced OUR TIME (2009) his first documentary about what it’s like to be young in America. For more go to: Our Time Projects

“A triumph of access and unbelievable” – Katie Walsh, TheWrap

“Heineman has the ear of a great reporter and the eye of a truly great photojournalist.“ – Andy Lea, Daily Express (UK)

“Even if you were glued to the news when it was happening, you won’t have seen anything quite like the shots Heineman and his cinematographers capture here.” – Leslie Felperin, Guardian