After producing the comeback tour of The Monkees in 1986, promoter and talent 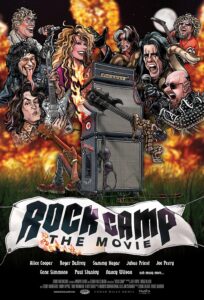 agent David Fishof founded Rock’ n’ Roll Fantasy Camp, which has been making dream comes true for more than 25 years. Summer camp meets Spinal Tap, Rock’ n’ Roll Fantasy Camp brings together musicians from all walks of life for an unforgettable experience with legendary rock stars. These musicians teach, inspire, and jam with the campers over four days, concluding with a life performance at a famed venue. The experience takes music lovers from spectator to the stage, sharing the limelight with their musical heroes. Rock Camp, The Movie follows four

campers (and their families) trough their journeys to shred with their heroes and see how they overcome their fears and transform their lives. Rock Camp – The Movie boasts a jaw-dropping array of rock star “counselors” that include Roger

Daltrey, Alice Cooper, Paul Stanley and Gene Simmons,  Nancy Wilson, Joe Perry, Jeff Beck, Slash, and countless other rock legends. Directed and produced by Doug Blush, co-directed and edited by Renee Barron, and produced by Jeff Rowe. Rock’ n’ Roll Fantasy Camp founder David Fishof joins us to talk about his life as a promoter, the amazing array of talented artists he has gotten to know and the endless joy that his “Fantasy Camp” and now the “The Movie” has brought him over these many years.

For news and updates go to: rockcampthemovie.com

About the founder – David Fishof began his career as a sports agency and eventually an entertainment executive and music producer more than four decades ago. Through the Rock’ n’ Roll Fantasy Camp, he has been making dream comes true for more than 25 years. Whether he’s producing a tour, assembling an All-Starr band with Ringo Starr, or writing a best-selling book, there’s one thing David Fishof is always doing: dreaming. Hailed as one of the most creative and innovative entertainment producers in the world, David has been responsible for some of the most original, successful, and exciting live shows ever brought to the stage. But of all the shows he’s put on over his 40-plus year career, there’s one production that stands out from all the rest: Rock ‘n’ Roll Fantasy Camp. After years of good fortune working with veteran rockers like Roger Daltrey, Ringo Starr, The Monkees, Levon Helm, Joe Walsh, Jack Bruce and Peter Frampton, David decided it was time to share his experiences with rock fans around the world. And so, in 1997, he debuted the rock camp—a place where regular people can reconnect with their passion for music alongside the most famous names in the business. For more information go to: rockcamp.com

“I love this film. it really has a grid heart to it.” – Richard Roeper, ABC Chicago – Windy City LIVE