This gripping and beautifully rendered drama from filmmakers Christine Molloy 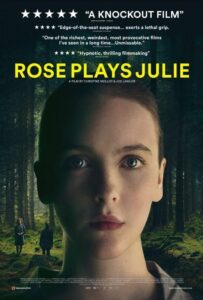 and Joe Lawlor, Rose Plays Julie, tells the tale of Rose, a young veterinary student who has wanted to know who her biological parents are and the facts of her true identity for as long as she can remember. Rose (Ann Skelly) decides to contact Ellen (Orla Brady), the birth mother who gave her up for adoption. But Ellen, now a successful London-based actress, doesn’t want to know her. Undeterred, Rose presses forward. And curiosity leads her to discoveries that shake the fragile identity she has built for herself. With Rose Plays Julie co-directors Christine Molloy and Joe Lawlor have crafted a slow-burn thriller that builds a sense of dread inside an exquisite world of immaculate architecture, rendered through an icy performance style and

enveloped by a claustrophobic soundtrack. Ann Skelly and Orla Brady are both exacting and measured in their delivery, as the film takes us through longing and revenge to arrive at the dark places of power and its abuses. Joining us to talk about their meticulous work of Rose Plays Julie are co-directors Christine Malloy and Joe Lawlor. The filmmaking duo work under the moniker of Desperate Optimists, having spent years making atmospheric cinema that often wades into the deep psychology of identity, personal trauma, as they dive into the complicated and the inherently elusive nature of justice.

For news and updates go to: filmmovement.com/rose-plays-julie

For more on the film go to: samsonfilms.com/rose-plays-julie

About the filmmakers – Born in Dublin, Ireland, Christine Molloy and Joe Lawlor studied theatre in the UK in the late 80s at Dartington College of Arts, graduating in 1992. From 1992 to 1999 they devised, directed and performed in six internationally acclaimed touring theatre shows under the company name, desperate optimists, before shifting their attention towards moving image based work. Between 2000 and 2003 they directed a number of episodic, interactive works for the internet, and large-scale community video projects for galleries. Between 2003 and 2010 Molloy and Lawlor, produced, wrote and directed 10 acclaimed short films, under the title CIVIC LIFE. HELEN, their debut feature film, premiered at the 2008 Edinburgh International Film Festival before screening at over 50 film festivals worldwide. They live in London with their daughter. For more go to: molloyandlawlor.com

“[T]here is no doubt about the chillingly accumulated potency and force of this movie, or the quality of the performances. It is a really powerful film and Brady’s final dialogue scene exerts a lethal grip.” – Peter Bradshaw, The Guardian

“Christine Malloy and Joe Lawlor’s film is one of the best screen depictions of the internal struggle of being adopted, perfectly realising a character’s permanent sense of existential displacement, and constant worries that she’s not living the life she was intended for. I was absolutely floored by this film….” – Alistair Ryder, Film Inquiry

“Its emotional dilemmas, depictions of trauma, revenge and fractured family ties are handled with such skill and sense of purpose, it is truly exemplary film-making.” – Martyn Conterio, CineVue

“Dark and involving, this slow-burn Irish drama dives into a remarkably involving situation that encompasses a variety of taboo themes….” – Rich Cline, Shadows on the Wall