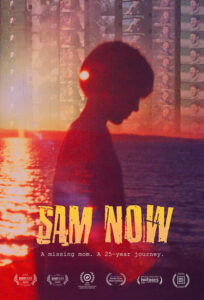 poses the question, “What happens when a boy and his brother go on a road trip in search of their missing mom?” Filmed over an expanse of 25 years, two brothers go on a 2,000-mile road trip to solve a family mystery. Shooting on nearly every camera format imaginable, from hand-developed Super-8 film to Arri 4K, Sam Harkness and his older half-brother Reed use their  creative world of fiction filmmaking to dive headfirst into dealing with the issue at hand: Sam’s mom is missing. Sam’s wetsuit and mask wearing alter ego, the Blue Panther, bounds into frame with youthful energy and a heroic spirit of adventure. But can the Blue Panther save the day? And are these fun-loving brothers 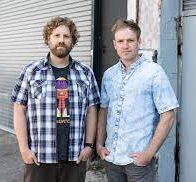 actually ready for what lies ahead? Cracking the case of Sam’s mom’s disappearance is only the beginning  of their story. As Sam grows up, the optimistic boy with his heart set on finding his mom becomes a man whose new hope is to break the

cycle of intergenerational trauma. Director / Producer / Cinematographer Reed Harkness and Producer / Editor Jason Reid join us for a conversation on how they both became filmmakers, a friendship dating back to childhood, how and when Reed realized that his archive of family footage and film collaborations with his brother Sam became the emotional subtext in a search for their mom who walked out of their lives in order to save her own.

For more go to: samnowmovie.com

About the filmmaker – Director / Producer / Cinematographer Reed Harkness attended film school in his backyard and garage.At age 18, he began making a series of short films starring his younger brother Sam. This was the beginning of a project two decades in the making: SAM NOW, a coming-of-age film that follows his brother from age 11 to 36. Reed also directed the award-winning 30-minute documentary FOREST ON FIRE and the documentary series for Topic, HOUSE ON FIRE.  See more: haha.work/we-did-this

About the filmmaker – Producer / editor Jason Reid is an award-winning producer, editor and director. He directed and produced the Emmy® Award-winning MAN ZOU: BEIJING TO SHANGHAI and the Webby Award-winning SONICSGATE: REQUIEM FOR A TEAM, which aired on CNBC and ESPN. He produced and edited K2: SIREN OF THE HIMALAYAS and EVERGREEN: THE ROAD TO LEGALIZATION, which both aired on Netflix. He recently produced and edited the hit climbing film DIRTBAG: THE LEGEND OF FRED BECKEY.  See more: 2rprod.com

“There are very few projects as impactful as Sam Now. Balancing a dynamic energy with haunting emotions, the film is a focused slice of real life that captures a truth so powerful and complex that it simply can’t be fully understood in the realm of fiction. The feature is touching in all the right ways and stands tall as one of the best films of the year.”  – Carson Timar, Clapper

“The obsessive documentation of the brothers’ childhood in Reed Harkness’ documentary “Sam Now,” where they are playing with cameras and making movies, is just beautiful. It’s such an incredible storehouse of feeling. And then the film becomes an investigation or excavation of their family that is very unusual.” – – Tamara Jenkins, RogerEbert.com

“Reed Harkness has made a wonderful once-in-a-lifetime film. Filled with intimate family footage, Sam Now feels like a novel or a well-crafted drama, but it’s all too true. It’s a truly artistic documentary, which should be seen and embraced by discerning audiences in North America and abroad.” – Marc Glassman, POV Magazine

“Days after seeing the film I am still pondering it. The film kicked up all sorts of thoughts and feelings about things in my own life that I haven’t thought of or wanted to ponder… You really should see this and see how it hits you. This is a really good film and is highly recommended.” – Steve Kopian, Unseen Films

“The film that changed my life… I hate to sound dramatic but my viewing of Sam Now felt almost supernatural. I had read about how sometimes great art can make you feel that way, how it can totally gut you, transform you, chew you up and spit you out in the best of all ways, but I had never experienced that phenomenon myself, not until that moment.” – Jennifer Julia, Telluride Daily Planet