National Geographic’s epic, revealing and emotional Secrets of the Whales is what you get when immersed in the secretive world of whales and you see life and l 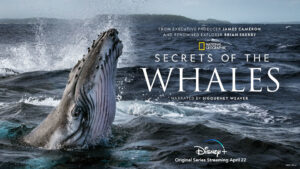 for the loss of loved ones. Filmed over three years in 24 global locations, throughout this epic journey, we learn that whales are far more complex and more like us than ever imagined. This is a personal story that very

few are lucky enough to witness … until now. SECRETS OF THE WHALES is narrated by award-winning actress and conservationist Sigourney Weaver and scored by French composer Raphaelle Thibaut. Producer Brian Skerry joins us for a conversation on the challenges and rewards of this immersive and groundbreaking journey into the world of sentient beings living in the underwater world where they love and live, just like us.

For news and updates go to: nationalgeographic.com/secrets-of-the-whales

Along with the release of the SECRETS OF THE WHALES book, a special May ocean issue of National Geographic Magazine will be available online: natgeo.com, dedicated to Earth Day 2021. Lastly, as a companion piece to the book, Skerry is featured in the Disney+ original four-part series, SECRETS OF THE WHALES, from National Geographic which will be premiering on Earth Day -Thursday, April 22, 2021. All four episodes of the Disney + original four-part series are available to stream on April 22. Episode 1: Orca Dynasty – Episode 2: Humpback Song – Episode 3: Beluga Kingdom – Episode 4: Ocean Giants (Sperm Whale)

First time evidence suggested that Belugas give themselves names, so groups can keep track of each other; baby belugas share their moms’ call signs

First time scientists learned that a baby sperm whale suckled from its mother until they saw this footage.

First time 30,000 humpbacks can be seen charging down the coast of Australia towards Antarctica and use breeches to talk to each other

First time ever a sperm whale calf is recorded feeding

First time cross-species adoption is ever recorded; Beluga pod adopts narwhal as part of the pod