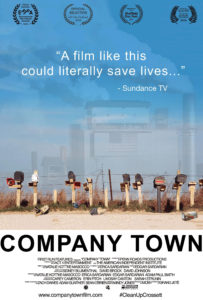 Crossett, Arkansas is home to about 5,500 people, one Georgia-Pacific paper and chemical plant owned by billionaire brothers Charles Koch and David Koch, and a startling rate of cancer and illness. The groundbreaking investigative documentary Company Town follows local pastor David Bouie as he fights to save his community. It offers a rare look inside a small town ruled by a single company, where the government’s environmental protections have been subverted and ignored, leaving its citizens to take on entrenched powers in a fight for justice. Crossett is just one of hundreds of towns across America polluted by big business and failed by local, state and federal environmental protections. Company Town ultimately asks, what do you do when the company you work for and live next to is making you sick? It is the story of a modern-day David vs. Goliath. Filmed over the course of nearly four years, Company Town offers first-hand accounts from a wide range of residents in Crossett’s “cancer cluster,” including Simone Smith, who was diagnosed with cancer at 9 years old; Hazel Parker, a former Georgia-Pacific employee whose mother, sister and father died from cancer; and Leroy Patton, the only person on his block to survive his health battle. And it brings to light the account on one whistle-blower who puts his life and family on the line to shed light on Georgia-Pacific’s egregious pollution, cover up and political influence. Co-directors Natalie Kotke-Masocco and Erica Sardarian join us to talk about their quietly devastating film about corporate greed, corruption and malfeasance.

For news and updates go to: CompanyTown.com