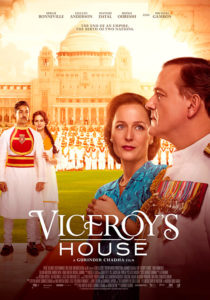 New nations are rarely born in peace… India, 1947: Lord Mountbatten (Hugh Bonneville) is dispatched, along with his wife Edwina (Gillian Anderson), to New Delhi to oversee the country’s transition from British rule to independence. Taking his place in the resplendent mansion known as the Viceroy’s House, Mountbatten arrives hopeful for a peaceful transference of power. But ending centuries of colonial rule in a country divided by deep religious and cultural differences proves no easy undertaking, setting off a seismic struggle that threatens to tear India apart. VICEROY’S HOUSE delves into the “upstairs/downstairs” real-life history of Lord Mountbatten and his family in 1947 India from the perspectives of both the Mountbattens and the people of India. The story of India’s partition is not only a story of independence, but also one of the greatest refugee crisis in history. With sumptuous period detail, director Gurinder Chadha (Bend It Like Beckham) brings to life a pivotal historical moment that re-shaped the world.

For news and updates go to: Viceroy’s House

“At the end of this sprawling, passionate but generously non-partisan epic, a moving coda reveals the director’s personal stake in telling the story her way. You should stay for the credits.” – Ella Taylor, NPR

“The film carries a trace of the sweep of a great screen epic along with the straightforward, explanatory qualities of mass-audience TV, and is never less than absorbing.” – Ben Kenigsberg, New York Times

“sing the trappings of old-fashioned romanticism, Chadha envisions the cataclysmic upheaval of millions in the traumatic lives of a few.” – Serena Donadoni, Village Voice