Strong Island chronicles the arc of a family across history, geography and tragedy – from the racial segregation of the Jim Crow South to the promise of New York City; from the presumed safety of middle class suburbs, to the maelstrom of an unexpected, violent death. It is the story of the Ford family: Barbara Dunmore, William Ford and 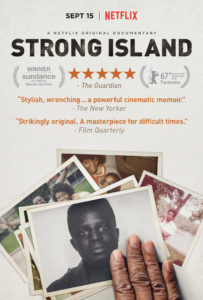 their three children and how their lives were shaped by the enduring shadow of race in America. In April 1992, on Long Island NY, William Jr., the Ford’s eldest child, a black 24 year-old teacher, was killed by Mark Reilly, a white 19 year-old mechanic. Although Ford was unarmed, he became the prime suspect in his own murder. A deeply intimate and meditative film, Strong Island asks what one can do when the grief of loss is entwined with historical injustice, and how one grapples with the complicity of silence, which can bind a family in an imitation of life, and a nation with a false sense of justice. Director Yance Ford, who is transgender, is a recipient of the Creative Capital Award, a MacDowell Colony Fellowship, a Sundance Documentary Film Program Fellowship, and was among Filmmaker Magazine’s 25 New Faces of Independent Film in 2011. For ten years Ford was privileged to work as Series Producer for the PBS showcase POV and where his curatorial work helped garner more than 16 Emmy nominations. Ford is also an architectural welder, and while at Modern Art Foundry he helped assemble the sculpture “Maman” by Louise Bourgeois—the series of three spiders exhibited at Rockefeller Center, and now on permanent display at the Guggenheim Museum in Bilbao, Spain. Director Yance Ford joins us for a conversation on grief, justice, racism, expectations, and the profound impact this 25-year long saga has had on his family.

For news and updates go to: strongislandfilm.com

“Ford is more than a witness-he is a crucial participant in the events of the film, and its elements of pain and guilt are reflected in his grief-stricken, self-interrogating aesthetic.” – Richard Brody, New Yorker

“Ford’s intent as a filmmaker isn’t just to expose and protest the injustice of his brother’s murder. It’s to say: Behold what was lost. A life. A human being. A complex soul. A family’s equilibrium. Feel what was lost.” – Owen Gleiberman, Variety

“It’s clear that the filmmaker wants you to feel the same kind of hurt and anger he feels as more information unfolds about William Ford Jr.’s death.” – Jamie Broadnax, Black Girl Nerds

“Truly special, especially as it moves towards its final act, in which Yance begins to wonder about his own actions before William Jr.’s death, and how they might have contributed to the situation.” – Bilge Emir, Village Voice