Winner of 16 festival awards – from Audience Choice to Best Feature/Actress/Music and Screenplay – YEAR BY THE SEA chronicles empty-nester Joan Anderson’s (Karen Allen) decision not to follow her relocated husband to Kansas. Instead, she retreats to Cape Cod to rediscover herself and redefine her life. Plagued with guilt, 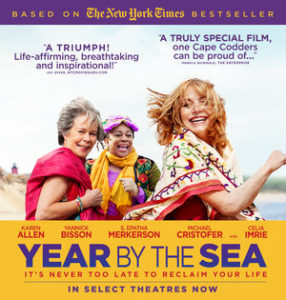 she questions her decision until stumbling upon a spirited mentor, Joan Erikson (Celia Imrie) – author and wife of famed psychologist Erik Erikson (Alvin Epstein), who coined the term “identity crisis.” With a support group that includes her literary agent and a host of locals, Joan learns to embrace the ebb and flow of life – ultimately discovering the balance between self and sacrifice, obligation and desire. YEAR BY THE SEA, based on the New York Times and international best-selling memoir by Joan Anderson and starring highly acclaimed screen and stage actress Karen Allen (Raiders of the Lost Ark, Animal House). Written, directed and composed by Alexander Janko, YEAR BY THE SEA will open at Lincoln Plaza and Landmark Sunshine in New York on September 8 and at Laemmle Royal, Town Center and Playhouse 7 in Los Angeles on September 15. Director Janko joins to talk his life-affirming tale of friendship, love and pushing against expectations.

For news and updates go to: YearByTheSea.com

Opens at the Royal, Town Center and Playhouse 7 in Los Angeles – September 15

“[Year by the Sea] is not a film trying to show the extraordinary in the mundane, but rather create a space for characters like Joan to figure out what they can become.” – Jose Solis Mayen, The Film Stage

“The movie is not entirely my cup of tea, although it is refreshing in its depiction of diverse, older female characters.” – Glenn Kenny, New York Times

“As it charts its familiar course, the film has soothing, even therapeutic value.” – Alan Scherstuhl, Village Voice

“A life-affirming, breathtaking, and inspirational film that will nourish your heart, mind and soul. It’s the perfect antidote to Hollywood’s blockbusters. Karen Allen gives the best performance of her career! What a triumph!” – Avi Offer, NYC Movie Guru