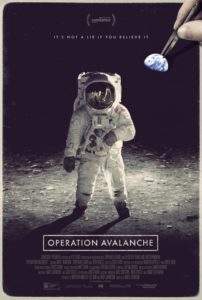 1967: the height of the Cold War, Tte CIA suspects there is a Russian mole inside of NASA, sabotaging the Apollo program. They send two young agents on a mission to go undercover, posing as documentary filmmakers to capture NASA’s race to the moon. The real mission – use their access and technology to hunt down the leak. But what they discover is far more shocking than soviet spies… Their government may be hiding a secret about Apollo that could define the decade, and the White House will stop at nothing to silence anyone who learns it. Operation Avalanche, Director Matt Johnson’s follow-up to the widely-acclaimed The Dirties, is another fake documentary film starring Johnson and collaborator Owen Williams, once again as young would-be filmmakers. This time, though, the DV cameras and school-shooting plot are swapped out for 16mm and the faking of the moon landing. Director Matt Johnson and Producer Matthew Miller join us for a conversation on the inspiration for Operation Avalanche , striking the right tone and the wide variety of reactions of filmgoers to the “conspiracy.”

For news and updates go to: operation-avalanche

“A bold, imaginative and refreshingly diverting “documentary” that’s occasionally uneven in tone, and most fun and clever when it doesn’t take itself too seriously.” – Avi Offer, NYC Movie Guide

“Matthew Johnson may not have his big breakout with Operation Avalanche, but there is enough here to suggest that he possesses the triple-threat skills to build a comedy auteur career on the model of (hyperbole alert!) Woody Allen or Albert Brooks.” – Michael Agresta, Austin Chronicle

“A film for nerds, of the film, science and conspiracy variety. The attention to detail is astounding and the obsession with art and history is infectious.” – William Babbiani, CraveOnline