MOTHERLAND takes us into the heart of the planet’s busiest maternity hospital in one of the world’s poorest and most populous countries: the Philippines. The film’s 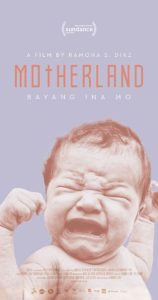 viewer, like an unseen outsider dropped unobtrusively into the hospital’s stream of activity, passes through hallways, enters rooms and listens in on conversations. At first, the surrounding people are strangers, but as the film continues, it’s absorbingly intimate, rendering the women at the heart of the story increasingly familiar. In a hospital that is literally bursting with life, we witness the miracle and wonder of the human condition. Diaz, a veteran documentarian began filming in the search of a story on reproductive justice, visited the Dr. Jose Fabella Memorial Hospital in Manila, Philippines.  As the busiest maternity ward in the world, it averages 60 births a day—and at its peak, as many as 100 babies within a 24-hour period.  Fabella Hospital is the final safety net for very poor pregnant women, most of whom cannot afford either contraception or the $60 delivery fee.  Immersing the viewer with a fly on the wall cinema verité approach,” MOTHERLAND –  winner of World Cinema Documentary Special Jury Award for Commanding Vision at Sundance will open on September 22 in Los Angeles at the Laemmle Monica Film Center. Director Ramona Diaz stops by to talk about her immersive, intimate film that finds intimacy and caring in the midst of controlled bedlam.

For news and updates go to: motherland-film.com

“A remarkable work of documentary storytelling, raw, intimate and subsequently quite profound” – Hammer to Nail

“…recalls the observational techniques and insights of the films of Frederick Wiseman.” – Village Voice

“Diaz masterfully captures the Fabella Memorial Hospital and a number of immediately engaging subjects, guiding audiences into their world and experiences of motherhood so completely that it almost feels as if they’ve been watching a continuing series for several seasons.” – Whatnottodoc

“Motherland” is an extraordinary vérité portrait of Manila’s Fabella Hospital, where an average of 60 babies are born daily, making it the busiest maternity ward in the predominantly Catholic country, and reportedly in the world. – LA Times