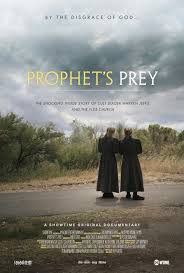 Prophet’s Prey, the quietly terrifying new film from Oscar-nominated director Amy Berg (Deliver Us from Evil, West of Memphis) continues her trenchant investigation of patriarchal abuse couched under the protective guise of religion, and the systemic flaws in our criminal justice system. The acclaimed documentary, which debuted at this year’s Sundance Film Festival, is largely set against the deceptively bucolic scenery of the American heartland. Berg’s focus is the Fundamentalist Church of Latter-Day Saints (FLDS), a polygamous, unsanctioned offshoot of the Mormon Church run by the tyrannical, self-proclaimed prophet, Warren Jeffs. To cover up his sins and elude accountability, Jeff continuously moved around the country, always choosing remote, well-guarded and monitored locations. By sequestering the FLDS members in these deceptively Eden-like settings, he was able to inculcate them and bend them to his will without any threat of outside interference. Though he was placed on the FBI’s most-wanted list and, eventually, captured and sentenced to life in prison, Warren Jeffs continues to prey on the FLDS community in absentia, his power largely unchecked and unchallenged to this very day. Director Amy Berg, the critically-acclaimed, Emmy Award-winning and Oscar-nominated documentary filmmaker joins us to talk about her compelling film and the destructive whims of a manipulative madman.

For news and updates go to: prophetsprey.org

Friday, 9/25, at the 7:15 screening: Dax Shepherd & Kristen Bell will be moderating. Sam Brower and Amy Berg will be on the panel.

On Sat, 9/26 at the 7:15 screening: Henry Rollins will be moderating. Sam Brower and Amy Berg will be on the panel.

“Berg lays down a narrative of warped religious authority and patriarchal abuse every bit as chilling as her pedophile priest exposé, “Deliver Us From Evil.” – Robert Abele, LA Times

“As horror upon horror unfolds in Prophet’s Prey, Amy Berg’s shocking documentary about the mad polygamist Warren Jeffs and his followers, one may marvel, in horror, at the elaborate forms that deviancy can take.” – Joe Morgenstern, Wall Street Journal

“One watches the film with an escalating sense of disbelief and horror, as Warren Jeffs is steadily revealed to be an even greater monster than we initially take him for. “ – Chock Bowen, Slant Magazine

A gripping, authoritative account of the myriad abuses of Warren Jeffs, the currently incarcerated leader of the Fundamentalist Church of Jesus Christ of Latter-day Saints. – Justin Chang·Variety