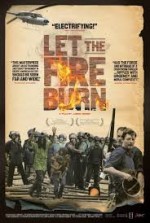 On May 13, 1985, a longtime feud between the city of Philadelphia and controversial radical urban group MOVE came to a deadly climax. By order of local authorities, police dropped military-grade explosives onto a MOVE-occupied rowhouse. TV cameras captured the conflagration that quickly escalated-and resulted in the tragic deaths of eleven people (including five children) and the destruction of 61 homes. It was only later discovered that authorities decided to “…let the fire burn.” Using only archival news coverage and interviews, first-time filmmaker Osder has brought to life one of the most tumultuous and largely forgotten clashes between government and citizens in modern American history. In the astonishingly gripping Let the Fire Burn, director Jason Osder talks about how he was able to craft found-footage film into a work that unfurls with the tension of a great thriller.

“Let the Fire Burn outshines the lackluster likes of Our Nixon by combining the death-trip of a Senna with the radical history of Black Power Mixtape.” – Nicolas Rapold, Film Comment Magazine

“Telling its riveting, despairing tale entirely through archival footage, the terrific documentary “Let the Fire Burn” has the force and intrigue of a courtroom thriller.” – Tim Griererson, Screen International