Nero (Johnny Ortiz) is sent back to Mexico after failing to cross the Tijuana border. Under  cover of Fourth of July fireworks, Nero makes his second attempt across a 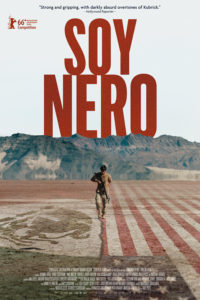 concrete trench spanning an interstate highway to the promise land. He hitches a ride with Seymour (Michael Harney), a paranoid pistol-toting veteran traveling with his daughter. Soon after, Nero runs away at a gas station when the local  police question Seymour. Nero makes his way through East Los Angeles, looking for his brother, Jesus (Ian Casselberry), and lands in the plush suburbs of Beverly Hills. Jesus pretends to be a car mechanic living in a gauche Beverly Hills mansion to impress his younger brother, but the ruse won’t last forever. The young Maldonado is now half way around the world fighting for the United States Army to obtain his citizenship. Nero is manning an outpost in the middle of nowhere with his fellow soldiers and commanding officer (Rory Cochrane). The group fights back a hostile ambush after gunning down a car that failed to acknowledge the checkpoint. Nero must survive the

unforgiving Middle East desert, and face the harsh reality of being a green card soldier for the United States Army. Rafi Pitts’ films have attained acclaim and awards around the globe. Pitts’ first feature, The Fifth Season (1997), premiered in the Venice Film Festival. His second, Sanam (2000)  was hailed by French critics and compared to The 400 Blows (1959). In 2003, Pitts presented his controversial feature documentary, Cinéma, de notre temps: Abel Ferrara: Not  Guilty (2003) in the Official Selection of the Locarno Film Festival. It’s Winter (2006)  premiered in the Berlin Competition, and one year later, the Seattle International Film Festival honored Pitts with the Emerging Masters Award for his work. Director Rafi Pitts joins us to talk about his gripping tale of people in search of place, security and a new life.

For news and updates go to: soynero.com