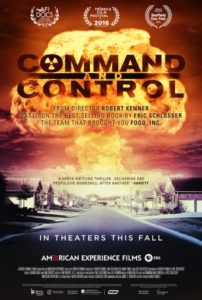 On the evening of September 18, 1980, Airmen David F. Powell and Jeffrey L. Plumb were performing routine maintenance at the Titan II silo in Damascus, Arkansas. At the age of 21, Powell was considered a highly experienced missile technician; Plumb, who had just turned 19, was still in training. As the two stood on a platform near the top of the Titan II, a socket fell from Powell’s wrench, plummeted 70 feet and, shockingly, punctured the missile. A stream of highly explosive rocket fuel began pouring into the silo of the most powerful nuclear warhead ever built by the United States. A chilling, Dr. Strangelovian nightmare plays out at a Titan II missile complex in Arkansas in September, 1980. A deadly accident leads Air Force personnel, weapon designers, and first responders to work feverishly to prevent a catastrophic explosion. Directed by Robert Kenner (FOOD, INC.) and based on the critically-acclaimed book by Eric Schlosser (FAST FOOD NATION), COMMAND AND CONTROL is a minute-by-minute account of this long-hidden story – much of it based on recently declassified documents that expose other freak accidents and near-misses. How do you manage weapons of mass destruction without being destroyed by them? COMMAND AND CONTROL chronicles nine hours of terror that prevented an explosion 600 times more powerful than Hiroshima. Director Robert Kenner joins us for a lively conversation on impact nuclear weapons have on our lives and the horrifying 36-year old apocalyptic tale that is just now being told.

For news and updates go to: commandandcontrolfilm.com

In person Q&As with director Robert Kenner and Author Eric Schlosser following the 7:30pm screenings on 9/30 and 10/1.

“Lots of documentaries these days will tell you to be afraid, to be very afraid, but few will scare you as coolly and as convincingly as “Command and Control.”” – Kenneth Turan, LA Times

“Kenner stages his story like a thriller, using the reminiscences of those who were on site to unspool the white-knuckle story.” – Michael O’Sullivan, Washington Post

“Our most destructive weapons are somehow immune to our own clumsiness and inexactitude, aren’t they? No, they’re not.” – Neil Genzlinger, The NYTimes

“Despite the high stakes, Command and Control is morbidly fun to watch, in the manner of good suspense thrillers and disaster films.” – Chris Packham, Village Voice