Dolores Huerta is among the most important, yet least known, activists in American history. An equal partner in co-founding the first farm workers unions with 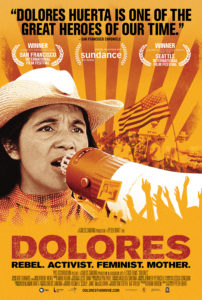 Cesar Chavez, her enormous contributions have gone largely unrecognized. Dolores tirelessly led the fight for racial and labor justice alongside Chavez, becoming one of the most defiant feminists of the twentieth century—and she continues the fight to this day, at 87. With intimate and unprecedented access to this intensely private mother to eleven, the film reveals the raw, personal stakes involved in committing one’s life to social change. DOLORES is directed by Peter Bratt (LA MISSION) and Executive Produced by humanitarian and Grammy Award-winning musician Carlos Santana. The film debuted at the Sundance Film Festival this year and continues to be a favorite on the festival circuit, garnering Audience Awards at the San Francisco International Film Festival, Montclair Film Festival, Houston Latino Film Festival and the Denver Women + Film Festival, as well as receiving the Golden Space Needle Best Documentary Award from the Seattle International Film Festival. Director Peter Bratt joins us for an engaging and lively conversation about a visionary leader who refuses to give into to pessimism and inaction.

For news and updates go to: doloresthemovie.com

Question and Answers with Dolores Huerta, Peter Bratt, and Carlos Santana in person 9/8

“‘Dolores’ is a documentary that celebrates a hero, but it’s no hagiography. Its subject wouldn’t stand for that.” – Kenneth Turan, Los Angeles Times

“As a girl, she says, she had wanted to be a dancer. In some way you can see that in her work: She has made activism an art form.” – Ken Jaworowsky, New York Times

“Bratt masterfully corrects the record … revealing a charismatic, complicated woman who persevered – despite the disruption to her family and swirling disapproval of her personal life.”  – Daphne Howland, Village Voice