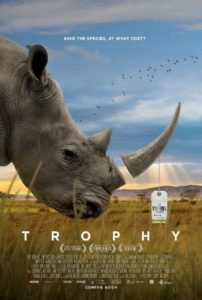 species such as elephants, rhinos and lions march ever closer to extinction. This provocative follow-up to Schwarz’s acclaimed Narco Cultura journeys viewers across lush African forests and vast plains and into the world’s largest hunters’ convention in Las Vegas to meet breeders and hunters who passionately believe in animal conservation. A common mantra of these businesses – “if it pays, it stays” – sums up the controversial notion that if you assign monetary value to an animal, it is worth protecting. TROPHY follows Philip Glass, a Texas-based sheep breeder and life-long hunter who is on a quest to collect the “Big Five” (elephant, buffalo, lion, leopard, and rhino). Philip is deeply connected to the land and animals, Chris Moore, a Zimbabwean wildlife officer whose anti-poaching campaign is partially subsidized by big-game hunters like Philip. Chris works with government authorities and communities to keep people safe from wild animals. He also protects those animals from ruthless poachers. The great irony of Chris’s work is that he goes to “extreme lengths” to protect endangered animals, only to have them killed by trophy hunters. Co-director Christina Clusiau and Shaul Schwarz joins us for a frank conversation on the fate of these magnificent creatures and who or what will determine their uncertain future.

For news and update go to: trophy.film

”A bracing look at the intersection of big business and animal-rights protection.  It will enrage, enlighten and confound in equal measure.” – Variety

“Sprawling, complex and beautifully lensed documentary about the tensions that exist between wild-life conservation and the global hunting industry.” – Screen International

“A more elegant, cinematically sophisticated approach… a documentary that is simultaneously gorgeous and unwatchable. Its very form embodies the film’s central, andvery controversial conflict… Don’t let the beauty of its images fool you; it’s a supremely confrontational, even infuriating work. It’s hard to know what to make of Trophy, and something tells me the filmmakers wouldn’t want it any other way.” – Bilge Ebiri, The Village Voice / LA Weekly

“A sweeping new documentary that tells a story as captivating as its images are beautiful.” – IndieWire