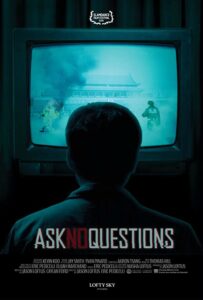 public suicide, Chen Ruichang is detained in a Clockwork Orange-style brainwashing facility and forced to accept the government’s account. But Chen, a former insider of the state TV himself, believes it was all a government plot. A CNN reporter smuggled out footage of the event that day, but was then muzzled by Beijing. Now, her eyewitness testimony helps untangle an intricate conspiracy, as Chinese authorities begin pressuring the filmmaker’s family and business associates. The terrifying danger of a government nefariously crafting the narrative & imprisoning its citizens who practice Falun Gong in China in the gripping feature documentary ASK NO QUESTIONS from filmmakers Jason  Loftus (The Bleeding Edge, Human Harvest)

and Eric Pedicelli (Black Code, Tin City Voices), which world premieres on Saturday, January 25th. In the vein of a journalistic true crime documentary, painting the scope of the crime, and the depths of the investigation. The story leads into allegations of criminal conduct at a governmental scale. Evidence is credibly presented, shocking, and thorough. Director Jason Loftus stops by for a conversation on the terrifying reach of a totalitarian state power structure and the impact it can have on those who dare challenge it.

For news and updates go to: asknoquestionsfilm.com

About the filmmakers: Director and Producer Jason Loftus is a Peabody Award-winning film producer and four-time Canadian Screen Award nominee. His work spans documentary, docuseries, virtual reality, narrative games, and animation. He is CEO of the Toronto-based Lofty Sky Entertainment and Lofty Sky Pictures. Ask No Questions is Jason’s directorial debut in a documentary feature.

Director and Editor Eric Pedicelli – Eric’s films have highlighted women’s right to education in Ivory Coast, surveillance of activists in Rio de Janeiro, and internet censorship in Iran. He edited Black Code (directed by Nick de Pencier), examining perils faced by activists in the digital age. It premiered at TIFF and earned Eric a Canadian Screen Award nomination for Best Editing. Ask No Questions is his feature documentary directorial debut.

“A few cunningly-placed cameras, a couple of threats, and some psychologically unstable recruits – and voila! – a whole new reality may be formed (in that sense, it’s like a real-life version of Barry Levinson’s satire Wag the Dog)” – Alex Saveliev, Film Threat

““Dissects a dramatic event with clear arguments and reasonable analysis–it is very well done. Darkness must be exposed, and Ask No Questions can play a valuable role.” – Ai Weiwei

“The film is particularly relevant now… a cautionary tale about how hard it can be to come to the truth.” – SF Weekly

“It shows the terrifying height of ‘fake news’ and presents a lot of difficult but timely questions about media, governmental authority, censorship, and freedom of the press.” – rocketminer.com

“A wicked trip down the rabbit hole… Without a doubt, Ask No Questions is a must see.” – Unseen Films

“Like an ice bath with each revealed truth being another shred of ice raising the hairs on the back of your neck.” – Slug Magazine