The latest from the creative filmmaking team behind the trippy sci-fi triumph, The 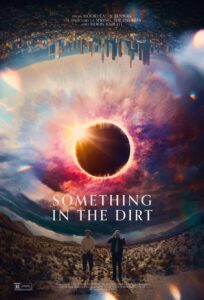 Endless, comes SOMETHING IN THE DIRT. The film focuses on Levi, a man who has snagged a no-lease apartment sight unseen in the Hollywood Hills to crash at while he ties up loose ends for his exodus from Los Angeles. He quickly strikes up a rapport with his new neighbor John, swapping stories like old friends under the glowing, smoke-filled skies of the city. Soon after meeting, Levi and John witness something impossible in one of their apartments. Terrified at first, they soon realize this could change their lives and give them a purpose. With dollar signs in their eyes, these two eccentric strangers will attempt to prove the

supernatural. DIY wonderkids Aaron Moorhead and Justin Benson serve as co-directors, co-stars, co-editors, writer (Benson) and cinematographer (Moorhead) of this twisted, sci-fi talkie. Their odd-ball chemistry shines on screen and in the script, as these two

isolated and unfulfilled individuals spur each other toward wormholes and away from reality. SOMETHING IN THE DIRT tells a tale of these paranoid times, where every answer imaginable is just a Google search away. Co-directors, co-producers, co-editors Justin Benson and Aaron Moorhead (Synchronic, The Endless)  stop by for a conversation on the inspiration for Something in the Dirt, the decision to cast themselves as the lead actors, and how they landed on the right blend of science, occult, history and psychedelic atmospherics.

For more go to: xyzfilms.com/something-in-the-dirt

“Garage punk sci-fi of the kind not much seen since Alex Cox’s Repo Man… a film that gives questions to the answers you’ve always been looking for.” – Damon Wise, Deadline

“Their latest fusion of science fiction, character drama, dark comedy, and overwhelming paranoia, “Something in the Dirt,” feels like their most personal film.” – Jason Bailey, The Playlist

“This is Benson and Moorhead at their best, creating a genre film filled with tenderness and intimacy. It’s bizarre, it’s relatable, and it’s sweet.” – Mary Beth McAndrews, Dread Central

“A mind-melter… Benson and Moorhead’s most complex production to date, and proof of the duo’s willingness to challenge themselves as much as their audience.” – Andy Crump, Inverse