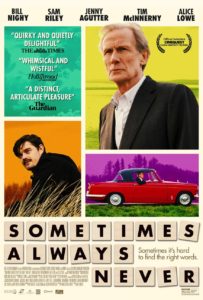 SOMETIMES ALWAYS NEVER follows a stylish tailor and wayward father, Alan, (Bill Nighy) who is has spent a big chunk of his adult life playing the word game Scrabble. At the expense of his other relationships Alan has spent years searching tirelessly for his missing son, Michael, who stormed out over a game of Scrabble. With a body to identify and his family torn apart, Alan must repair the relationship with his youngest son, Jack (Sam Riley) and identify an online player who he thinks could be Michael, so he can finally move on

and reunite his family. A quirky mystery / comedy starring the BAFTA winner Bill Nighy (Love Actually, Shaun of the Dead), SOMETIMES ALWAYS NEVER is a story about redemption, family, and finding the right words. Director Carl Hunter joins us to talk about his on-going work with screenwriter working with Cottrell-Boyce, and the photo that convinced lead actor Bill Nighy to join the project and striking the right visual look for his thoughtful, wryly funny film.

About the filmmaker: Carl Hunter is a director, screenwriter and also the bass player for Liverpool band, The Farm, who had a number 1 LP, Spartacus in 1991, 3 top 10 singles and spent a total of 50 weeks in the official top 40s for both LPs and singles. He has been making films, producing and directing, since the late 1990s and in 2019 he directed his first feature film, Sometimes, Always, Never, starring Bill Nighy and produced by Hurricane Films. In 2007, Carl produced and co-wrote the feature film, ‘Grow Your Own.’ He’s currently developing his next ideas with writer Frank Cottrell-Boyce.

“It’s universally well acted and it’s directed with an inventive, original visual style that matches the audacity of basing a film on Scrabble, by TV director Carl Hunter. The end result is unusual, intriguing and endearing.” – Alexa Dalby, Dog and Wolf

“It’s Nighy who will have you enthralled. He delivers a subtle, nuanced performance that allows the actor to shine while in full support of his costars.” – Kevin Crust, Los Angeles Times

“Screenwriter Frank Cottrell Boyce, who adapted the film from his own short story, has crafted a joy of a script, which seeds its themes as elegantly as Nighy’s character, Alan, a Scrabble-obsessed tailor, wears his suits. – Wendy Ide, Observer (UK)