Based on harrowing true events, SONG WITHOUT A NAME tells the story 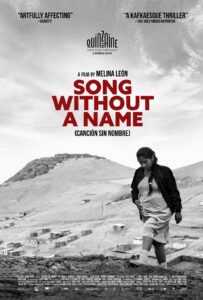 of Georgina, an indigenous Andean woman whose newborn baby is whisked away moments after its birth in a downtown Lima clinic – and never returned. Stonewalled by a byzantine and indifferent legal system, Georgina approaches journalist Pedro Campas, who uncovers a web of fake clinics and abductions – suggesting a rotting corruption deep within Peruvian society. Set in 1988, in a Peru wracked by political violence and turmoil, Melina León’s heart-wrenching first feature renders Georgina’s story in gorgeous, shadowy black-and-white cinematography. SONG WITHOUT A NAME is a Kafkaesque thriller that unflinchingly depicts real-life,

stranger-than fiction tragedies with poetic beauty. A 2019 Cannes Camera d’Or nominee, SONG WITHOUT A NAME, and winner of more than 30 international awards including “Best Film” at the Lima Latin American Film Festival and “Best Film by an Emerging

Director” at the Munich Film Festival, the Latin American period piece has garnered raves around the world. Director Melina León joins us to talk about her starkly beautiful film and the heart-wrenching story of loss, and love against the backdrop of political and social upheaval.

For news and updates go to: filmmovement.com/song-without-a-name

“There are similarities here with Alfonso Cuaron’s Roma which go beyond the striking black and white photography. Both films deal with social hierarchies in Latin American countries which divide the population along racial lines; both feature wrenching depictions of interrupted motherhood.” – Wendy Ide, Screen Daily

“…haunting…. The racism and exclusion addressed here remain pertinent issues. The power of León’s work lies in the way that she explores these themes without ever taking her finger off the pulse of the narrative. “ – Jennie Kermode, Eye for Film

“With gorgeous monochrome visuals and rich musical layers, the film is evidence of a strong new directorial voice, ear and eye. Song Without a Nameis above all an exquisite audiovisual experience. – Stephen Dalton, The Hollywood Reporter