In their mesmerizing new film, SPACE DOG, Elsa Kremser and Levin Peter chronicle the legacy of Laika, a stray dog picked up by the 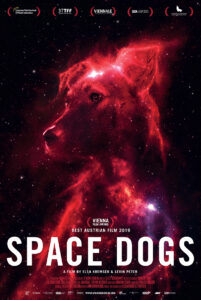 Soviet space program on the streets of Moscow, the first living being to orbit the earth when she was launched into space on Sputnik 2. Kremser and Peter trace the persistence of her memory and legacy into the present day. As the capsule containing the lifeless body of Laika re-entered Earth’s orbit and began to burn up, the narrator announces “What had been a Moscow street dog had become a ghost.”The ghost Laika lives on in the present-day strays of SPACE DOGS. Photographed at ground level with wandering, hypnotic camera movements, the strays are seen navigating the urban environs of modern Moscow. In hewing closely to the dog’s point of view, the city is rendered as a strange, alien environment. Pulsating music from buildings and unidentified passerby take on an unfamiliar quality as the dogs 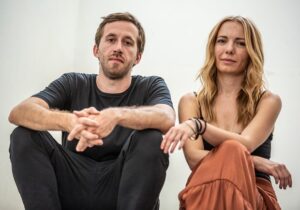 explore this strange new world. Archival footage of the Soviet space program is interwoven throughout the film, reveling in the bizarre tests and procedures the canines were subjected to in preparation for space travel. Co-directors Elsa Kremser and Levin Peter join us for a conversation on their fascinating project that features stunning cinematography and meditative pacing that recalls the work of Andrei Tarkovsky, and how SPACE DOGS de-centers humans in order to uncover a forgotten history.

For news, screenings and updates go to: icarusfilms.com/if-spaced

For more about the filmmakers go to: raumzeitfilm.com

About the filmmaker – Director ELSA KREMSER Born 1985 in Austria, Elsa Kremser studied Film at the University of Vienna and the Filmakademie Ludwigsburg. As an author and producer, she realized several documentaries that were shown worldwide. Her diploma film NEBEL premiered at the Berlinale. She was a jury member of Visions du Réel and participated in the Nipkow Grand and the EuroDoc program. In 2016 she founded the Vienna-based production company RAUMZEITFILM together with Levin Peter. As a directing duo, they are currently working on their first fiction feature, THE GREEN PARROT, which received the Berlinale Kompagnon Script Award. Their recent documentary SPACE DOGS premiered at Locarno IFF where it received two special jury mentions. It was presented at over 50 festivals worldwide and awarded as the “Best Austrian Film 2019” at the Viennale.

About the filmmaker – Director LEVIN PETER Born 1985 in Germany, Levin Peter studied at the Filmakademie Ludwigsburg where he realized several documentaries that were shown worldwide. His diploma film BEYOND THE SNOWSTORM won the German Upcoming Film Award and was presented as a Guest at the Berlinale. He was a jury member at Visions du Réel and received the Nipkow and the Gerd Ruge Grant. In 2016 he founded the Vienna-based production company RAUMZEITFILM with Elsa Kremser. As a directing duo, they are currently working on their first fiction feature, THE GREEN PARROT, which received the Berlinale Kompagnon Script Award. Their recent documentary SPACE DOGS premiered at Locarno IFF where it received two special jury mentions. It was presented at over 50 festivals worldwide and awarded as the “Best Austrian Film 2019” at the Viennale.

“Brutal but also deeply sensitive; a complex work that got under my skin.” —Film Comment

“No one leaves this movie unchanged.” —Publico

“Radical and rigorous; one of the documentaries of the year.” —Film Idea

“Undoubtedly the most exciting film at Locarno: a philosophical film that does what cinema has to do: show unseen images.” —Deutchland Funk

“A total work of art, foreshadowing a near future in which man is no longer the center of the world.” —Kino Zeit

“The scariest film of the year.” —CineEuropa