SPINSTER drops us into the life of Gaby (Chelsea Peretti). Gaby wants desperately to find 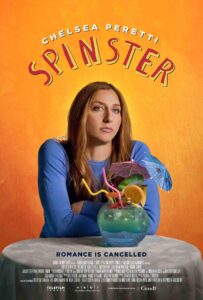 real love. Recently dumped and on the brink of forty, she feels she doesn’t matter to anyone. Her best friend is pre-occupied with her kids, her family doesn’t get her, and running her own catering business, mostly weddings, serves as a constant reminder of the love that has eluded her. Gaby’s greatest fear, that she’ll end up a lonely and pathetic spinster, seems to be her destiny. After a frenzy of dating leaves her exhausted and demoralized, she admits she might never find

love and must create a Plan B. Gaby begins  to build a meaningful and connected life. But when a chance romantic encounter with Mr. Right threatens to uproot her, she realizes the value of her life, even if it doesn’t involve romance. Written by Jennifer Deyell and anchored by a beautifully nuanced performance from Chelsea Peretti (Brooklyn Nine-Nine), SPINSTER Director Andrea Dorfman joins us to talk about her witty, beguiling comedy about being honest with oneself and embracing life.

For news and updates go to: /andreadorfman.com/spinster

About the filmmaker: Andrea Dorfman is a filmmaker, animator and artist. She directed the feature films Parsley Days (2000), a TIFF top ten film, the critically acclaimed Love That Boy (2003) featuring a young Ellen Page, the musical drama, Heartbeat (2014), and the soon-to-be released comedy, Spinster, starring Chelsea Peretti. The short film, There’s A Flower in my Pedal (2005), was runner up to Best Short at TIFF and her documentary, Sluts (2006), won Best Documentary at the Atlantic Film Festival. Dorfman also made several animated films including two with the National Film Board of Canada – the Emmy nominated, Flawed (2010) and Big Mouth (2012). She recently shot and directed the feature doc, also produced by the NFB, The Girls of Meru (2018) and it’s currently screening at film festivals around the world. Her short live action-animation video collaboration with poet-musician, Tanya Davis, How to Be Alone  (2010), has garnered over 8 million YouTube hits and was adapted to a book, illustrated by Dorfman and published by HarperCollins. She also adapted and illustrated  Flawed,  released as a YA graphic memoir by Firefly Canada in 2018. Dorfman occasionally teaches at the Nova Scotia College of Art and Design and was the co-creator of Blowhard, a thematic storytelling series that ran for 7 years in Halifax, Nova Scotia.