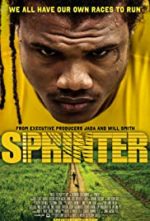 Akeem Sharp (newcomer Dale Elliott), nicknamed the Rasta Rocket for his once-in-a-generation speed, who is set to be Jamaica’s next big track-and-field sensation. Akeem hopes his rise in athletics will take him to the U.S. to reunite him with his mother, who has supported the family while living as an illegal resident for over a decade. But Akeem’s rising star is weighed down by turmoil at home: a volatile father, and an unruly older brother who insinuates himself into Akeem’s career as a means of escaping –

For news and updates go to: sprinterthefilm.com

“A beautiful and triumphant film.  What the film also importantly illustrates is the struggle so many immigrants’ families feel when mothers or fathers are forced to separate from their children in order to find a better life in another country so they can send money back home.”  – The Knockturnal

“Saulter displays a great eye with his thoughtfully shot drama that captures life in Jamaica in a way that is rarely seen on screen.” – The Los Angeles Times

“One of those rare films that will grow by the positive word-of-mouth. Every single frame is beautiful to look at and under director Saulter’s expert eye, he makes Jamaica look like a paradise lost which matches the intensity of the story.  Powerful.  A must see.”  – Los Angeles Sentinel