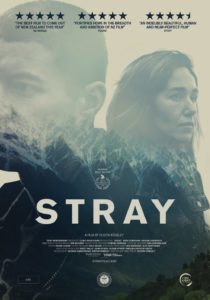 feature film debut, takes place in a cold and remote landscape, two strangers, Jack (Kieran Charnock) and Grace (Arta Dobroshi) struggle to repair their broken pasts. A young man is on parole after serving time for attempting to murder the man who killed his girlfriend in a hit and run. A woman is released from a psychiatric facility far from her homeland. These two damaged strangers cross paths in the mountains in winter and fall into a complex

intimate relationship, putting to the test their capacity to trust and heal. A stark, complex story of people confronting their past while struggling to find their own resolve to forge a better future. Director / Producer / Writer Dustin Feneley joins us for a conversation on his own journey getting Stray financed and completed  as well as crafting a beautifully rendered tale of two lost, psychologically exhausted souls.

For news, screenings and updates go to: strayfilm.com

“Stray is simply contemplative and resoundingly lyrical in representing two kinds of nature set against one another: pained human nature and the Great Outdoors joined at the emotional hip” – Frank Ochieng, Flick Feast

“Stray is a quiet and internalised film that will demand your attention and compassion to really appreciate. A resolution – of sorts – when it arrives, is conveyed in a single, wordless shot.” – Graeme Tuckett, Stuff.co.nz

“While not an apolitical film…Feneley never lets social commentary overpower his narrative, constantly returning to the internal struggle, and never romanticising the damage his protagonists suffer from.” – Doug Dillaman, 4:3

“It is an iceberg of a film – what appears above the surface barely scratches at the behemoth of emotion lurking within.” – Tom Augustine, New Zealand Herald