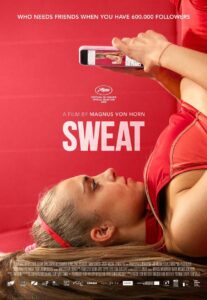 Koleśnik, in a star-making role) who has seemingly has it made: hundreds of thousands of social media followers, endorsement deals, photo spreads in magazines. But as she starts to share more and more online, the rising pressure from

concerned sponsors and increasingly obsessive fans forces her to confront her deepest insecurities and the exhaustive demands of her lifestyle. Director Magnus von Horn joins us for a conversation on his feature film debut, his inspiration for a story that manages  to capture a cultural zeitgeist, the transactional nature of fame and the mesmerizing performance by newcomer Magdalena Koleśnik.

For news and updates go to: mubi.com/films/sweat-2020

The breakout second feature from writer-director Magnus von Horn, SWEAT is a shocking glimpse beneath the candy-colored surface of internet celebrity. In select US theaters June 18. On MUBI in the US, India, Turkey and Latin America from July 23

About the filmmaker – Magnus von Horn was born in 1983 in Gothenburg, Sweden. He graduated from the Polish National Film School in Łódź in 2013, where he now teaches directing. His debut feature The Here After (2015) premiered at the Directors’ Fortnight at Cannes in 2015 and won two Swedish Guldbagge Awards for Best Film and Best Director. He took part in the TorinoFilmLab for his second feature, Sweat (2020).

“Sweat is one of the first great films about an influencer. Magnus von Horn’s Sweat avoids the cliche of portraying an Instagram influencer as shallow and instead extends empathy to her and her fans.” – Orla Smith, Seventh Row

“In her first leading role, Kolesnik is as irresistible as an energy bar, exploring the Insta-queen’s shallow depths with cunning sincerity.” – Deborah Young, Hollywood Reporter

“SWEAT is not a stalker thriller. Instead, it’s a rivetingly sober, incisive investigation of loneliness and intimacy in the Instagram era, a psychological profile of an influencer.” – Zhuo-Ning Su, Awards Daily

“Kolesnik is such a magnetic screen presence it’s a wonder that this movie marks her first leading role.” – Eric Kohn, indieWire