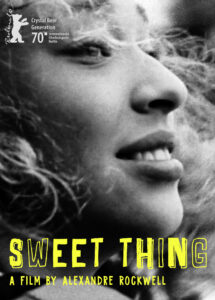 who fantasizes Billie Holiday as a sort of fairy godmother. Billie has to navigate the evolving challenges of her life while she plays mother to her 11-year-old brother, Nico. They meet up with another adolescent, run away from home, and together roam the area  free from their parents’ watchful eye. They discover freedom and enchantment among New Bedford’s boats and railway tracks. They fantasize about a life of luxury when they break into a posh home, and are able to carry the taste of affluence into their adventures. SWEET THING celebrates their 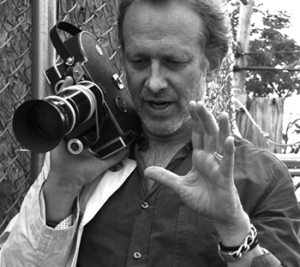 ability to make poetry and a joyful life out of hardship. The children come to represent a hope in our own resilience, as the film is an ode to that  trying age when young people prepare to take their first step into adulthood. The story is an intense but ultimately uplifting, poetic rendering of childhood that captures the essence of

that time in life when a day can last forever. SWEET THING, stars Rockwell’s children Lana and Nico, Karyn Parsons and Will Patton, Director and writer Alexandre Rockwell (In the Soup, Louis & Frank, 13 Moons) joins us for a conversation on his working with a superb cast that includes Lana and Nico Rockwell, Karyn Parsons and Will Patton, re-discovering a love for instinctive filmmaking and his embrace of storytelling that celebrates fearless youth, friendships, and family.

For news and theatrical screenings go to: filmmovement.com/sweet-thing

SWEET THING winner of the Berlinale Crystal Bear in the Generation K-plus section in 2020.

About the filmmaker – Rockwell managed to establish himself by the early 1980s. He already had several short films under his belt and his work was shown at Boston’s Institute for Contemporary Art and New York City’s Association of Independent Video and Film. This led to him landing his first feature film, Lenz which was shown at the 1982 Berlin Film Festival and enjoyed success. Rockwell followed up with the release of Hero, which won a Special Jury Prize at the 1984 Sundance Film Festival. In 1986, he married Yale graduate and Flashdance star Jennifer Beals. He didn’t make any films until Sons. Praise rained on Rockwell at The Sundance Film Festival when he released In the Soup. The movie featured Steve Buscemi, Seymour Cassel and Jennifer Beals. Rockwell’s next film Somebody to Love was less successful, though the omnibus movie Four Rooms was popular, in which Rockwell directed the segment “The Wrong Man”. Rockwell’s marriage to Beals ended in 1996 but they remained close friends. Unfortunately, Rockwell’s next offering, Louis & Frank, reprising two minor characters from In The Soup, flopped with audiences. Rockwell hit his stride again with the release of the successful 13 Moons, a comedy which featured a strong ensemble cast including Steve Buscemi and Karyn Parsons. Rockwell later married Parsons (best known for her work as “Hilary Banks” on The Fresh Prince of Bel-Air) on Valentine’s Day, 2003. After Pete Smalls Is Dead, he made the critically acclaimed Little Feet, starring his two young children, son Nico and daughter Lana, which was entirely funded by a Kickstarter campaign. With this feature, Rockwell continued the form that made him an iconoclast of the independent New York film movement of the nineties. After a break of 7 years, he returned to filmmaking with Sweet Thing, starring his wife Karyn and their two kids, winning the Crystal Bear award at the 2020 Berlin International Film Festival.

“A lively, bittersweet meditation on an impoverished childhood that is still rich in innocence and imagination…. With verve and vitality it pays a dreamy-eyed retrospective debt to films past, and largely due to the beguiling performance from Rockwell’s own daughter Lana, ultimately delivers a moving, tousled journey of discovery….” – Jessica Kiang, Variety

“Rockwell’s film about specific heartbreaking circumstances is accessibly potent in its portrayal of childhood and memory. He taps into the experience of complex emotions – fear mixed with hope, love entangled with heartbreak, and childhood prematurely ripped away – in ways that exemplify the unique potential of cinema.” – Mary-Catherine Harvey, The Upcoming

“Gorgeous… stunningly rendered….this is a film that deserves to be seen – Stephen Silver, Goomba Stomp

“The first paces of ‘Sweet Thing’ feel as they are taken from Charlie Chaplin’s ‘The Kid’. By iris-in, iris-out, long shot cuts into close-ups, the director Alexander Rockwell conveys a really fresh and intimate nostalgia.” – FILMFESTIVALS