A brand new 4K remastering of TALES FROM THE GIMLI HOSPITAL, Guy 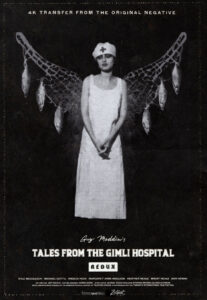 Maddin’s highly acclaimed first feature first released in 1988 and now regarded as one of the true cult hits on the midnight movie circuit. While their mother is dying in the modern Gimli, Manitoba hospital, two young children are told a tale by their Icelandic grandmother about Einar the Lonely, his friend Gunnar, and the angelic Snjofridur in a Gimli of old. Set during a smallpox epidemic in the village of Gimli, Manitoba near the turn of the century, TALES FROM THE GIMLI HOSPITAL REDUX is a dreamlike, elliptical film which explores the jealousy and madness instilled in  two men who share a hospital room “in a Gimli we no

longer know.” Director, producer, writer and auteur extraordinaire Guy Maddin (Brand Upon the Brain, The Heart of the World, My Winnipeg) returns to the program to talk about the trials and tribulations of his debut feature film and all that went into pulling together a large cast of professional and non-professional actors, finding ingenious ways of building the sets and filming whenever and however he could.

Updates and screenings go to: zeitgeistfilms.com/talesfromthegimlihospital

TALES FROM THE GIMLI HOSPITAL REDUXhad its world premiere at the 2022 Toronto International Film Festival. The new 4K digital remaster was supervised by Guy Maddin using original printing elements provided by the TIFF Cinematheque Library. Zeitgeist Films is partnering with Films We Like to theatrically release the film in the US and Canada, beginning September 30th at the TIFF Bell Lightbox, Toronto, October 14th at IFC Center in New York and the American Cinematheque in Los Feliz, Calif., will screen GIMLI on Oct. 16, 18 and 20 at the10:00 PM screening only.

About the filmmaker – Guy Maddin is a Canadian filmmaker with numerous shorts and 11 feature films to his credit, including the Emmy Award-winning ballet film Dracula — Pages From A Virgin’s Diary (2002). Maddin’s first film, produced through the Winnipeg Film Group, was the haunting family fable THE DEAD FATHER. This brought him the recognition he needed to embark on his second film, the cult hit, TALES FROM THE GIMLI HOSPITAL. This film played for months as a midnight movie in New York City and paved the way to perhaps his most delirious and insensible picture, ARCHANGEL. Its release brought Maddin the U.S. National Society of Film Critics’ prize for Best Experimental Film of the Year.  Following this triumph was Maddin’s first work in color, a story of repression and unnatural couplings entitled CAREFUL. The film opened Perspectives Canada at the 1993 Toronto Festival of Festivals and it went on to screen at the Tokyo and New York Film Festivals.  In 1995 Maddin created a short filmic prose-poem based on the work of Belgian charcoalier ODILON REDON. In 2000, along with other notable Canadian filmmakers, Maddin was commissioned to make a six-minute “prelude” for the Toronto International Film Festival in celebration of their 25th anniversary. The resulting short film, THE HEART OF THE WORLD, was proclaimed by many festival-goers and critics to be the best film of the entire festival and became the most acclaimed film to date of Maddin’s career. In 2002 Maddin filmed the Royal Winnipeg Ballet’s performance of Mark Godden’s ballet “Dracula” for Canadian TV and the resulting film, DRACULA: PAGES FROM A VIRGIN’S DIARY won an International Emmy award and was released theatrically to great acclaim. In 2003 Guy Maddin premiered the video peep-show installation COWARDS BEND THE KNEE in Toronto. COWARDS BEND THE KNEE was then released as a feature film in 2004. Also in 2004 Maddin directed THE SADDEST MUSIC IN THE WORLD, based on an original screenplay by Kazuo Ishiguro (author of The Remains of the Day). In 2007 Maddin directed MY WINNIPEG, an experimental documentary and semi-autobiographical account of Maddin’s childhood and the history of his hometown. And at the Rotterdam Film Festival in 2009 he premiered a new short film, SEND ME TO THE ’LECTRIC CHAIR starring Isabella Rossellini, which was projected on the side of an office building. He is also a member of The Order of Canada & The Order of Manitoba.For more go to: guy-maddin.com

“It is a strange piece of work.” – Stephen Holden, New York Times

“Guy Maddin’s groundbreaking debut feature Tales from the Gimli Hospital restored in glorious 4K, .. gorgeously crisp, the sound perfection, with a long-lost scene of the 1988 cult classic about blistering lust and seething envy on Lake Winnipeg.” – Anne Brodie, What She Said