From the opening shot of this striking environmental tale, TAMING THE 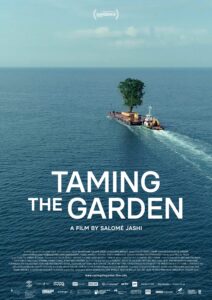 GARDEN, captures a otherworldly vibe, embodied by a tree as tall as a 15-story building floating on a barge across the vast Black Sea. Its destination lies within a garden countless miles away, privately owned by a wealthy and anonymous man whose passion resides in the removal, and subsequent replanting, of foreign trees into his own man-made Eden. With astonishing cinematic style, TAMING THE GARDEN tracks the surreal uprooting of ancient trees from their Georgian locales. With each removal, tensions flare between workers and villagers. Some see financial incentives – new roads, handsome fees – while others angrily mourn the loss of what was assumed an immovable monolith of their town’s collective history and

memory. With a steady and shrewdly observant eye, Jashi documents a single man’s power over Earth’s natural gardens: how majestic living artifacts of a country’s identity can so effortlessly become uprooted by individuals with no connection to the nature they now claim as their own. Director Salomé Jashi stops by to talk about the clash of immense wealth and political power and a rural, farming community with neither. The meditative tone of TAMING THE GARDEN allows the audience to reconcile the contrasting the people’s relationship with the powerful political class that has held sway over them for centuries.

For info and screenings go to: bigworldpictures.org/tamingthegarden

Big World Pictures is proud to present the US theatrical release of TAMING THE GARDEN, a film by Salomé Jashi. Winner of multiple film festival awards and a nominee for Best Documentary at the 2021 European Film Awards.TAMING THE GARDEN will screen at Laemmle Theaters in Los Angeles on October 10 & October 11.

Director’s statement Some time ago, the entire country of Georgia witnessed a surreal scene – a large tree floating in the sea. That was when we learned that the most powerful man in the country had a new passion – to own century-old trees on his private estate. I embarked on filming this process as Georgia’s whole coastline was involved in implementing one man’s desire. I wanted to explore what was behind this mesmerizingly strange image; to tell about the ambition of a powerful man, who alters landscapes, moves trees, leaves witnesses perplexed – all for the sake of his pleasure”. – Salomé Jashi.

About the filmmaker – Director, Writer, Cinematographer, Producer Salomé Jashi [Tbilisi, 1981] is a documentary filmmaker from Georgia. She has been attracted to filming micro environments from the very beginning of her career. Her visual approach is minimalist, poetical, sensitive and rough. Salomé Jashi’s Taming the Garden [2021] premiered at Sundance Film Festival’s World Cinema Documentary Competition and Berlinale Forum and was nominated for the European Film Awards. Her previous film The Dazzling Light of Sunset [2016] was awarded the Main Prize at Visions du Réel’s Regard Neuf Competition as well as at ZagrebDox, Jihlava IDFF, FIC Valdivia and several other festivals. Her earlier work Bakhmaro [2011] was nominated for the Asia Pacific Screen Awards. All three films were produced in collaboration with Arte’s La Lucarne. Her producing work How the Room Felt [2021] premiered at IDFA’s main competition.  Salomé Jashi holds an MA in documentary filmmaking from Royal Holloway, University of London [2006] as well as an MA in journalism from Georgian Institute of Public Affairs [2003]. She was a fellow of Nipkow Scholarship in 2017 and DAAD Artists-in-Berlin Program in 2020 and is a member of European Film Academy. For more go to: salomejashi.com

“Not only because the pictures are breathtaking. A complicated argument about ecology, economy, compromise, class and mankind’s need to conquer and/or “tame” nature is presented without resorting to a polemic attack.” – David Fear, Rolling Stone Magazine