The Big Scary “S” Word  chronicles the history of socialism in America. Though 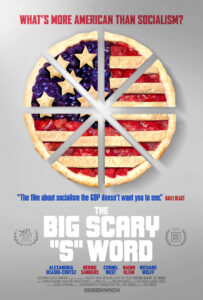 the policy agenda of the emerging democratic socialist left may not be quite front and center in a Biden administration, its influence is clear in the polling numbers that show bipartisan majorities supporting policies like Medicare for All, and in the new administration’s emphasis on expanding democracy and alleviating economic inequality. With passage of transformative pieces of legislation like HR1 and the PRO Act uncertain given the realities of the senate filibuster, this film reminds viewers that the fight to empower workers has always been a powerful force for social and political progress in the United States. Featuring new and archival interviews with Bernie Sanders, Alexandria Ocasio-Cortez, Cornel West, and Naomi Klein, The Big Scary “S” Word explores the rich history of the 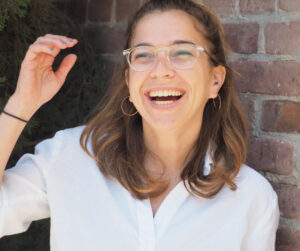 American socialist movement. Weaving together hidden episodes of history and verité footage, the film shows that, contrary to popular belief, socialism is in fact deeply American and led to popular government programs such as public schools and Medicare. Activists and journalists explain how the 2008 financial crisis, the Wall Street bailout, the Occupy Movement, and the ascension of politicians like Sanders and Ocasio-Cortez have pushed a new generation to embrace the language of socialism. Director Yael Bridge (Saving Capitalism) stops by for a conversation on the historical rabbit hole of deceitful rhetoric, hysteria and obfuscation that has marred any reasonable understanding of socialism and why he decided to embark on a project to present a clear-eyed history of socialism’s impact on America’s success.

For news and updates go to: socialismmovie.com

About the filmmaker – Yael Bridge is an Emmy-nominated documentary filmmaker. Her first feature, The Big Scary “S” Word, explores the history and resurgence of socialism in the United States and premiered at Hot Docs 2019. She produced Left on Purpose, winner of the Audience Award at DOC NYC. Most recently, she produced Saving Capitalism, starring former Secretary of Labor Robert Reich, which was nominated for an Emmy Award in Business and Economics. She was also the director of productions at Inequality Media, making viral videos that tackled complex political issues and gained over 100 million views in 2016. She holds an MFA in documentary film and video from Stanford University and an MA in media studies from the New School. She resides in Oakland, where she works as a filmmaker and film educator.

“Lively, engaging, persuasive. A minor miracle, First rate! Yael Bridge’s The Big Scary ‘S’ Word provides a persuasive analysis of the topic, as well as considerable argument for the notion that the basic principles of socialism are (as one interviewee here puts it) “as American as apple pie’.” – Dennis Harvey, Variety

“Next time you think that the word “socialism” should be bleeped, remember the advantages that you get from our government.” – Harvey S. Karten, Big Apple Reviews