THE BODY REMEMBERS WHEN THE WORLD BROKE OPEN reveals a beautifully intimate, real-time portrait that follows two Indigenous women from 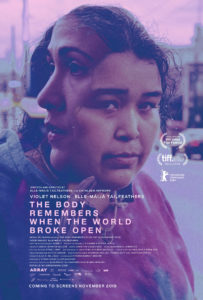 vastly different backgrounds whose worlds collide when one of them is fleeing a violent domestic attack.  A love poem to women, THE BODY REMEMBERS WHEN THE WORLD BROKE OPEN weaves a compellingly simple story around the complex themes of racialized female bodies, a country’s failure to support its most vulnerable youth, and the continuing effects of colonial violence.  THE BODY REMEMBERS WHEN THE WORLD BROKE OPEN is the newest acquisition from Ava DuVernay’s ARRAY Releasing. Founded in 2010 by Ava DuVernay, ARRAY is a film collective dedicated to the amplification of images by people of color and women

directors / co-writers Elle ­Máijá Tailfeathers and Kathleen Hepburn, as well as lead actor Violet Nelson joins us to talk about the different creative elements that went into the making of this heart-bending film on violence against women, class, privilege and the limitations of compassion.

For news and updates go to: arraynow.com/ The Body Remembers When the World Broke Open

For more on the work of Kathleen Hepburn go to: experimentalforest.ca/thebodyremembers

Elle­ Máijá Tailfeathers, Co­-Writer / Co­-Director, is a filmmaker, writer, and actor based in Vancouver, British Columbia. She is Blackfoot from the Kainai First Nation (Blood Reserve) as well as Sámi from northern Norway. She holds a Bachelor’s Degree from the University of British Columbia in Indigenous Studies with a Minor in Women’s and Gender Studies. THE BODY REMEMBERS WHEN THE WORLD BROKE OPEN is her debut narrative feature. Tailfeathers was the 2018 Sundance Institute Merata Mita Film Fellow and is an alumni of the Berlinale Talent Lab, the Hot Docs Accelerator Lab, the CFC/NFB/Ford Foundation Open Immersion Virtual Reality Lab, the Whistler Film Festival Aboriginal Film Fellowship, and the International Sámi Film Institute Indigenous Film Fellowship. Her short documentary, Bihttoš, was included in the TIFF Top Ten Canadian Shorts and was also nominated for a Canadian Screen Award and a Leo Award for Best Short Documentary.

Kathleen Hepburn, Co­-Writer / Co­-Director, is a Vancouver born writer and director whose debut feature, NEVER STEADY, NEVER STILL, which Variety Magazine calls a “stoically broken hearted debut,” premiered at the Toronto International Film Festival in 2017 and was awarded Best Canadian Film and Best Director by the Vancouver Film Critics Circle, as well as Special Jury Prize at the Dublin International Film Festival. It went on to be nominated for eight Canadian Screen Academy Awards including Best Picture. She holds an MFA in Creative Writing, and a BFA in Film Production from the Universities of Guelph and Simon Fraser respectively. THE BODY REMEMBERS WHEN THE WORLD BROKE OPEN is her sophomore feature, co­-written and co­-directed by Elle­-Máijá Tailfeathers.

“What Tailfeathers and Hepburn have shared… is a practice of filmmaking that grapples with these exact intricacies of embodiment and acknowledges them as wholly inextricable from Indigenous presents and futures.” – Sarah-Tai Black, Globe and Mail

“As poetic as its title, The Body Remembers When the World Broke Open cannot be understated for its power and must not be erased from the conversation.” – Aaron Berry, Film Inquiry

“Stands alongside many recent social realism dramas by the likes of Andrea Arnold and Lynne Ramsay … these performances will hit you like a punch to the gut.” Shelagh Rowan-Legg, Screen Anarchy