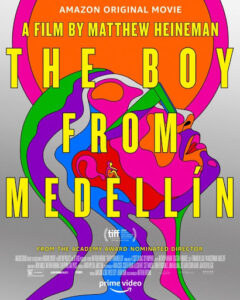 intimate portrait of one of the biggest international music super-stars of our time. THE BOY FROM MEDELLÍN follows J Balvin as he prepares for the most important concert of his career–a sold out stadium show in his hometown of Medellín, Colombia. But as the performance draws ever closer, the streets explode with growing political unrest, forcing the Latin Grammy-winning musician to wrestle with his responsibility as an artist to his country and his legions

of fans around the globe. As the public pressure of the approaching concert heightens, behind the scenes, Balvin also continues to deal with the anxiety and depression that has plagued him for years. Shot entirely in the dramatic week leading up to the concert, THE BOY FROM MEDELLÍN gives us unprecedented access to the “Prince of

Reggaeton,” and provides an immersive look into one of the most pivotal and emotionally charged moments of his life. Director, producer, cinematographer and editor Matthew Heineman joins us for a conversation on the insanely compressed and tumultuous week of filming, gaining the confidence and comfort of Balvin’s family and friends and capping the shoot by capturing a stadium-size concert, something he had never attempted before.

For more news go to: ourtimeprojects.com/the-boy-from-medellin

Watch at: amazonprime.com/The Boy from Medellin

About the filmmaker – Matthew Heineman is an Academy Award-nominated and Emmy Award-winning filmmaker. The Sundance Film Festival called Heineman “one of the most talented and exciting documentary filmmakers working today”, while Anne Thompson of Indiewire wrote that Heineman is a “respected and gifted filmmaker who combines gonzo fearlessness with empathetic sensitivity.” In 2019, he received a nomination for Outstanding Directorial Achievement of a First Time Feature Film Director from the Directors Guild of America for his narrative debut A Private War — making Heineman and Martin Scorsese the only filmmakers ever nominated for both narrative and documentary DGA Awards. Heineman’s 2015 film Cartel Land, which explores vigilantes taking on Mexican drug cartels, was nominated for an Academy Award for Best Documentary Feature and won three Primetime Emmy Awards, including Exceptional Merit in Documentary Filmmaking and Best Cinematography. For more go to: ourtimeprojects.com

“It’s not really a concert movie at all; it’s more a study of a performer and a man. I learned a lot about him, and came away appreciating all the complexity of him.” – Christy Lemire, FilmWeek (KPCC – NPR Los Angeles)

“Some films make do with stories that present an interesting surface and little more. In The Boy From Medellín, undercurrents run constantly. Depression and anxiety provide two of them, but the most dramatic one flows from politics.” – Joe Morgenstern, Wall Street Journal

“…intimate, open-hearted…Balvin seems to invite Heineman right into the heart of that inner circle, as “The Boy from Medellín” takes a fly-on-the-wall approach that codifies its subject’s authenticity at every turn.” – INDIEWIRE, David Ehrlich