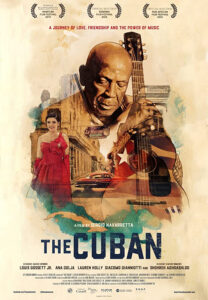 who has given up her dream of becoming a singer. Orphaned as a baby in Afghanistan, Mina’s grandfather sent her to Canada at the age of eight to live with a lone aunt, Bano (Shohreh Agdashloo). Mina longs to return to a better time when, as a child, she and her grandfather would sing and play music together. Thanks to Bano, Mina has a part-time job in a long-term care home. It’s there that Mina meets the withdrawn and enigmatic resident

Luis (Louis Gossett Jr.). Luis spends his time in a wheelchair in a quiet corner of the room, retreated inside his own mind. Mina brings a record player into his room. Luis reacts, reminisces, dances, reveals his incredible life as a famous musician in Cuba, and talks about the one great love who was left behind. THE CUBAN is a celebration and exploration of the power of music to connect and reset people’s outlook on life. Director, Producer and Co-screenwriter Sergio Navarretta joins us to talk about his warm-hearted tale of people in search of place and end up on a musical journey of love, friendship and the power of imagination.

For news, screenings and updates go to: thecubanmovie.com

About the filmmaker: Sergio Navarretta made his directorial debut with LOOKING FOR ANGELINA, a true crime feature that tells the story of one of the most sensational murder cases in North American history. LOOKING FOR ANGELINA won numerous awards, was showcased at festivals around the world, played to sold-out theatres in fifteen Canadian cities, and ranked amongst the top five in box office revenues for Canadian films at the time. Navarretta’s follow-up feature, THE COLOSSAL FAILURE OF THE MODERN RELATIONSHIP, starring Enrico Colantoni (“Just Shoot Me”). Between features, Navarretta has directed a number of award-winning short films, including THE FORTUNE COOKIE, OVER A SMALL CUP OF COFFEE and EN PLEIN AIR, an homage to the Group of Seven.  He also worked as a producer, service producer and executive producer under his own company banner, S.N.A.P. Films Inc., as well as for various international clients.  He executive produced (for Canada) the sci-fi movie, ANDRON starring Danny Glover and Alec Baldwin.  He is an executive producer of the biopic LAMBORGHINI, starring Alec Baldwin and Antonio Banderas, and was a consulting producer on TRADING PAINT, starring John Travolta.  Navarretta is proud to have executive produced and overseen all aspects of production and casting for the star-studded animated theatrical feature ARCTIC DOGS, now on Netflix, featuring Jeremy Renner, James Franco, Anjelica Huston, Alec Baldwin, John Cleese and Heidi Klum.

“The Cuban does not develop everything in its screenplay to complete satisfaction. But what’s there is very good and believable.” – Bobby LePire, Film Threat