THE CURRENT OCCUPANT drops us into a mysterious psychiatric ward, where 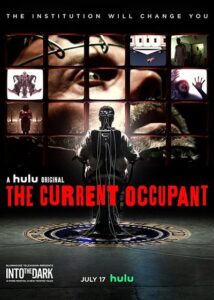 a man named Henry Cameron, with  no memory comes to learn that he is the President of the United States and the subject of a diabolical political conspiracy. As the asylum’s soul-crushing forces bear down on him, he fights to preserve his sanity and escape so that he can return to power. THE CURRENT OCCUPANT is part of the Blumhouse anthology, INTO THE DARK, currently airing on HULU with each episode tied to the

relevant holiday. The film is loosely tied to 4th of July. The story is a timely, edge-of-your-seat-until-the-very-end thriller that is part SHUTTER ISLAND meets BLACK MIRROR. THE CURRENT OCCUPANT features a number of terrific performances anchored by Barry Watson as “President” Henry Cameron, as well as Sonita Henry, Marvin Jones III, and Lilli Birdsell. Director Julius Ramsay stops by to talk about his creative process and how his background as a film editor informs his eye for filmmaking as well as the cinematic influences that echo throughout this taut thriller.

For news and updates go to: hulu.com/movie/the-current-occupant

About the filmmakers: Julius Ramsay is a critically acclaimed film and television director. His latest feature, THE CURRENT OCCUPANT, is a mind-bending, psychedelic horror film about a man trapped in a mysterious psychiatric ward with no memory who comes to believe that he’s the President of the United States and the subject of a diabolical political conspiracy. Produced by Blumhouse as a Hulu Original, it was released on Hulu in July 2020. Julius made his directorial debut with MIDNIGHTERS, a taut psychological thriller centered on a troubled marriage that explodes in an emotional bloodbath over the course of a single night.  The film won numerous accolades, including the top prize at the Ravenna Film Festival, and garnered rave reviews at the Los Angeles Film Festival.  In 2018, MIDNIGHTERS was distributed by IFC and is currently available on Hulu.Julius spent five years working as an editor and director on THE WALKING DEAD, the highest rated series in the history of cable television. His directorial work for television ranges from the science fiction series KRYPTON for David Goyer’s Phantom Four and Warner Horizon, to the adaptation of the blockbuster franchise THE PURGE for Blumhouse/NBCUniversal. His additional directorial credits include OUTCAST for Cinemax and SCREAM for The Weinstein Co & MTV. Prior to his career as a director, Julius was nominated for three Primetime Emmy awards for his work as an editor on such groundbreaking series as ALIAS and BATTLESTAR GALACTICA.  For more on the filmmaker: juliusramsay.com﻿

“While the latest Into The Dark installment is bleak and will crush your hopes, it’ll have you wondering about conspiracies, reality, and what really happens when the institutions that are established to help us actually end up harming us instead.’ – Sarah Musnicky, Nightmarish Conjurings