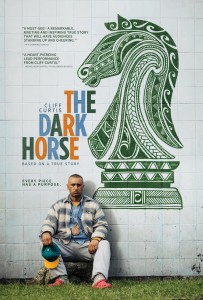 Based on a powerful true story, The Dark Horse is the uplifting portrait of a man searching for the courage to lead, despite his struggles with mental illness. The film features a stunning, award-winning performance by Cliff Curtis (Whale Rider, Blow, “Fear the Walking Dead”) as Genesis “Gen” Potini, a brilliant but troubled New Zealand chess champion who finds purpose by teaching underprivileged children about the rules of chess and life. After years in and out of mental institutions, Genesis is released into the care of his estranged brother Ariki (Wayne Hapi) and thrust into his volatile gang lifestyle. Seeking to escape this toxic environment, Genesis finds solace by volunteering at the Eastern Knights chess club and sharing his gift with the disadvantaged Maori children of his community.  Charismatic and impassioned, Gen encourages the group to train for the upcoming National Chess Championships.  But his teaching puts him at odds with his brother when Ariki’s son Mana (James Rolleston) shows an interest in the game – chess is considered a distraction from the teen’s imminent initiation into his father’s gang. The Dark Horse is rugged and raw gem of filmmaking anchored by brilliant central performance from Cliff Curtis. Director / writer James Napier Robertson stops by to talk about the amazing Genesis Potini, the lives he touched and the inspiration he provided to the cast and crew of The Dark Horse.

For news and updates go to: thedarkhorsefilm.com

“Curtis is so heartbreakingly convincing in the lead role that he routinely frees you of the feeling you’re watching one more adversity saga with scrappy kids and a third-act tournament.” – Robert Abele, LA Times.

“The Dark Horse” brings Cliff Curtis back home, and he gives a performance that’s transcendent in more ways than one.” – Joe Morgenstern, Wall Street Journal

“Combines several potentially tired subgenres – the inspirational-teacher drama, the mental illness drama, and the gang thriller – but, helped immeasurably by Curtis’s performance, makes something new out of them.” Bilge Ebiri, Village Voice

“It’s a film with the texture and truth of life, and at its heart is a beautiful performance by Cliff Curtis.” – Cath Clarke, Time Out