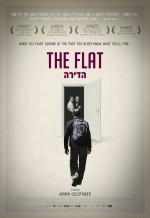 The flat on the third floor of a Bauhaus building in Tel Aviv was where filmmaker Arnon Goldfinger’s  grandparents had lived since they immigrated to Palestine in the 1930’s. Were it not for the view from the windows, one might have thought that the flat was in Berlin. When his grandmother passed away at the age of 98 his family were called to the flat to clear out what was left. Objects, pictures, letters and documents awaited them, revealing traces of a troubled and unknown past. The film, which begins with the emptying out of a flat, develops into a riveting adventure, involving unexpected national interests, a friendship that crosses enemy lines, and deeply repressed family emotions. And even reveals some secrets that should have probably remained untold… Arnon Goldfinger talks about the remarkable quest he took, with his mother at his side, to make sense of his grandparent’s life.

An astonishing trip into buried history and the human capacity for self-delusion, The Flat  follows filmmaker Arnon Goldfinger as he stumbles across a remarkable bit of history and slowly becomes a part of its thorny psychological terrain.  –  John DeFore, Hollywood Reporter