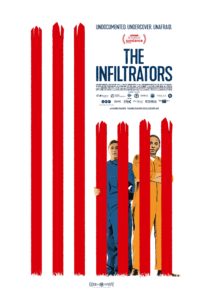 who are detained by Border Patrol and thrown into a shadowy for-profit detention center— on purpose. Marco and Viri are members of the National Immigrant Youth Alliance, a group of radical DREAMers who are on a mission to stop unjust deportations. And the best place to stop deportations, they believe, is in detention. However, when Marco and Viri attempt a daring reverse ‘prison break,’ things don’t go according to plan. By weaving together documentary footage of the real infiltrators with re-enactments of the events inside the detention center, THE

INFILTRATORS tells an incredible and thrilling true story in a genre-defying new cinematic language. Co-directors Cristina Ibarra and Alex Rivera joins for a conversation on dire conditions that await detainees, the cruelty of a for-profit system designed to frustrate people with legitimate reasons for remaining in the United States and their respect for the people who willingly put their lives and futures on the line for the sake of others.

Alex Rivera is an award-winning filmmaker who tells visually adventurous stories. His first

feature film, Sleep Dealer, won the screenwriting award at the 2008 Sundance Film Festival, was screened at the Museum of Modern Art, and had a commercial release around the world. In 2015 Alex was awarded support from the Surdna Foundation and the Ford Foundation for The Infiltrators.

Cristina Ibarra has been making award-winning films that explore the U.S.-Mexico border

for the past seventeen years. The New York Times calls her documentary Las Marthas “a striking alternative portrait of border-town life.” Her PBS documentary collaboration, The Last Conquistador, had a national broadcast on POV. In 2015 she became part of Women at Sundance.

“THE INFILTRATORS manages to personalize the undocumented struggle by transforming it into an unlikely blend of activism and suspense that makes a compelling case for the abolishment of ICE.” – Eric Kohn, INDIEWIRE

“Chronicling the audacious acts of a group of organized undocumented youth prior to the Obama-implemented, temporary relief known as DACA (Deferred Action for Childhood Arrivals), THE INFILTRATORS, from Latinx directors Alex Rivera and Cristina Ibarra, is a vital piece of hybrid cinema that shines light into the obscure realm of privately-operated immigration detention facilities.” – Carlos Aguilar, THE WRAP