On a cold night in February 2018, police enter a home in a Slovakian village and 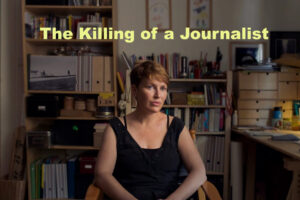 find a bloody crime scene. The body of Ján Kuciak, a 27-year-old investigative journalist, lies face-down near the front door. He has been shot twice in the chest. In the kitchen is his fiancée, Martina Kušnírová, shot once in the head. The killings of the young couple — who had planned to soon marry — inspire the biggest protests in Slovakia since the fall of communism, and spark the fall of the Slovakian government.  When a young police investigator pieces together the chain of events, he unearths a bizarre tale. The brutal murder ignited one of the biggest protests in

Slovakia since the fall of communism. As colleagues and family search for answers, a source leaks a secret case file of the murder that reveals corruption at the highest level of government. Filmmaker Matt Sarnecki shapes a concise and

thrilling reminder of the rising threat journalists around the world face to deliver the truth. Director Matt Sarnecki joins us for a conversation on the series of events that led him into documenting the unbelievable level of corruption in an Eastern European country, generally regarded as a major success,  as well as the very real threat journalist are facing, not just in Slovakia, but around the world and how that will impact the health of teetering democracies everywhere.

For updates go to: finalcutforreal.dk/the-killing-of-a-journalist

About the filmmaker – Matt Sarnecki is a journalist, producer and film director at the Organized Crime and Corruption Reporting Project. He has directed several documentaries broadcast throughout Europe and beyond. His documentary Killing Pavel, about the murder of investigative journalist Pavel Sheremet, won the Investigative Reporters and Editors Medal in 2017 and the DIG Award (Italy) in 2018. Previously, he produced and directed documentary series featured on VICE and powder.com. Born in Chicago, Illinois, Matt grew up in Los Angeles, California. At 17, he moved to New York City to attend Columbia University, earning a BA in political science and history. He spent two years as a Peace Corps volunteer in Romania before moving to Prague, Czech Republic, where he held a Fulbright Teaching Assistantship at the Film and TV School of the Academy of Performing Arts. In 2007 he returned to New York and spent several years working in television and documentary. In 2011 he moved to San Francisco and earned a master’s degree in journalism at the University of California, Berkeley.